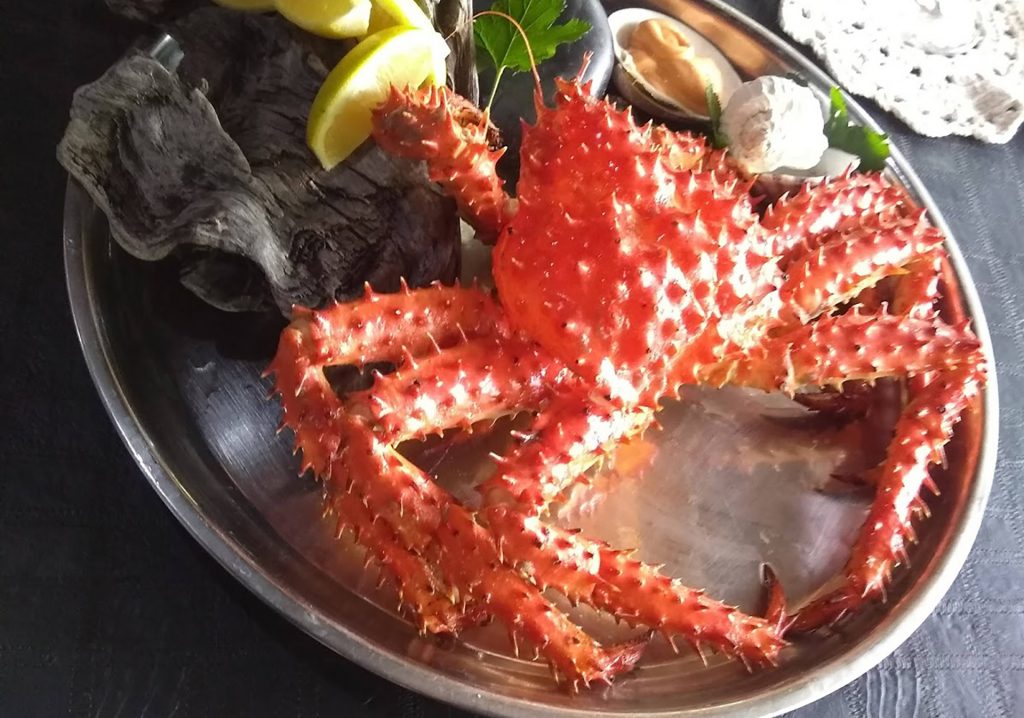 The experience of eating the prickly monster that is the Centolla, or Chilean King Crab, involves much more than enjoying its tender flesh. Its arrival at the table is a show in itself: the intense orange colour, the knobbly, spiky carapace and threatening claws and legs might well put off more squeamish diners but once you’ve get past the tough exterior and try the extraordinarily tender flesh you’ll be hooked for life. So how to cook centolla at home? It seems daunting but in fact it’s surprisingly simple. Before getting to the master recipe, let’s learn a little more about the sea creature.

The powerful crustacean is one of the largest of its kind in the world and is caught throughout the Patagonian coast (as well as in cold seas to the north), especially the Beagle Canal in the south of Argentina. It is without doubt an iconic dish of Ushuaia, the capital of Tierra del Fuego, where every restaurant prepares it in its own way.

A gourmet delicacy across the world, centollas are prized for the flesh of their legs and torsos and they’re best when they cooked alive, although this doesn’t happen very often. Generally, fisherpeople put them in boiling seawater the moment they’re caught because their flesh deteriorates very rapidly. They’re delivered to big cities frozen and usually ready to cook.

Craft fisherpeople in Puerto Almanza, a town admired across the world for its sustainable use of centollas from the Beagle Canal, catch them in traps. They only keep males with torsos larger than 11 cm across while the females are returned to the sea to allow their eggs to grow: they gestate for ten months. The off season between October and December is always respected to protect the biodiversity of marine life.

The indigenous Yámana people of the area were already familiar with the delicacy; its protein was a fundamental part of their diet. The women used their weaving skills to catch them in scoops made from branches.

‘The flesh is unique, I like to say that it has the flavour of the Beagle Canal, a mixture of stone, algae, sand and fresh water. It can be a distinctive snack and people are interested in traditional fishing methods. You can eat it as is, just as the fisherperson brings it in and it’s also very common to cook it on a very hot iron griddle with just a little lemon juice and white wine. At the hotel we also cook it in a special way, which we’re sharing with you here,’ says Haydée Paredes, the executive chef of Reinamora y Wine Bar, the restaurant and bat at Los Cauquenes Resort & Spa

For the plain centolla: mould the portion into a ring and place in the refrigerator.

For centolla gratinade: place the flesh in an oven dish and season with milk, salt and pepper. Grate a generous portion of cheese on top and cook in the oven on a high heat for 10 minutes.

For the fried centolla: warm an iron (ideally) pan, add a few drops of oil and fry the centolla for a few minutes, deglaze with the lemon juice and white wine to concentrate the cooking flavours, add pepper only.
Meanwhile, cook the squash in the oven with salt and pepper until tender. Remove the pulp and whisk it in a bowl with a dribble of olive oil and half the chopped clove of garlic until you get an emulsion similar to mayonnaise.
Presentation: place the ring of centolla to one side of the plate. In the centre, place the squash emulsion and put the fried centolla on top. Place the gratinade on the other side.

What wines go well with this dish?

As is generally true for seafood, the best wines pairings are whites or sparkling wines. In this case, we need to take the intense marine flavours and character of the centolla into account so one might plump for a high altitude Chardonnay from the Uco Valley whose mineral notes and subtle smoky oak aromas will elegantly complement the dish.

Sparkling wines are another good option, ideally those made using the champenoise method because of the more complex, layered aromas which ought to match the delicacy well. Even better if it’s a rosé: the fruitiness of the Pinot Noir will contrast nicely with the centolla while the bubbles enhance its fibrous texture.

So, now you’ve got the recipe, you’ll know what to do if you see centolla at your local fishmongers. Get ready to savour the flavours of the end of the world!