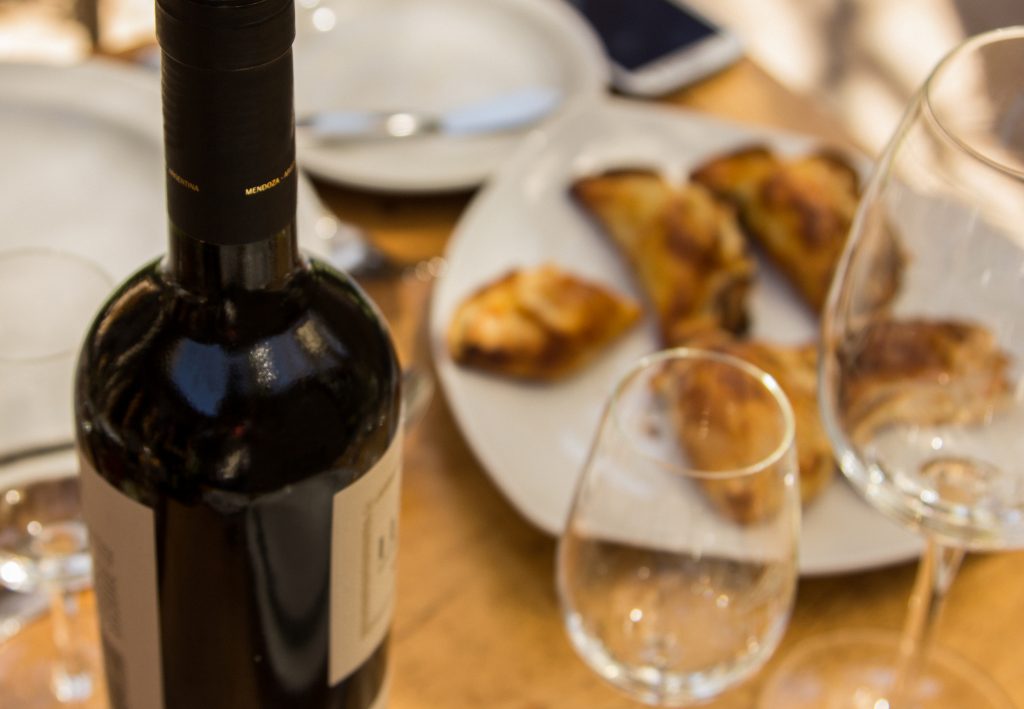 Argentine empanadas are a speciality, like asados (BBQ) or facturas (pastries). The best way to classify them is by origin, as each region has its own recipe, and each recipe a perfect wine to accompany them.

Empanadas are as Argentinian as facturas and mate: found in every corner of the country, in the city and in the countryside. At anytime Argentines will sink their teeth into one to tide them over, to keep their hunger at bay and they require no table or dishes to satisfy everyone.

But just because they are on the table everyday, it is no less true that they have many differences and nuances. One type are the “chorriadoras” or juicy empanadas of Cuyo, cooked in the clay oven, and another very distinct type are the deep fat fried empanadas with raisins from the southern province of Buenos Aires. Whatever the case, they are all united by one common element: a thin dough made from flour of wheat and fat, which houses the most curious and tasty fillings. A pinch and fold method called, “repulgue”, is used, which seals them in random shapes with rope-like edges.

Traditional empanadas are made with meat, onions and condiments. But there are also ones of beef with spring onions, potatoes, olives and bell peppers. Or stuffed with corn dough (called “tamale” and are typical of the Northwest) or cheese and onion, and even fish, prunes and bacon or simply blood sausage and potatoes, in gourmet versions. Pretty much anything that fits in an empanada, – a disk of dough the size of a CD – can become a filling. But if anything distinguishes Argentine empanadas, it is their locality.

A product from the Spanish colony in America – all empanadas ultimately trace their origins from those eaten in Spain – in viceregal times when road communication was poor, each region developed a taste for a filling and a cooking method. And also a way to eat them and accompany them with wines.
So, this is all you need to know about traditional Argentine empanadas and their wine pairings:

Empanadas tucumanas. Tucumán is a historical province, the cradle of Argentine independence. In their tradition, this snack is a main dish. It is home to the National Empanada Festival in the town of Famailla, which annually chooses the best ‘empanadera’ (empanada maker) of the country. The local recipe is made with sliced meat, so that when cooked, they are juicy on the inside. While green onions and cumin in abundance are the key to its marked flavour. Preferably cooked in the clay oven, and often eaten by splitting them in half and adding a squeeze of lemon for a refreshing taste. Torrontes is the ideal partner as the personality of cumin and scallions demand freshness, but we must not neglect Malbec or Syrah produced in Colalao del Valle, the Tucuman side of the Calchaquí Valley.

Empanadas salteñas . In this northwestern province of colonial heritage, they claim, with pride, to have the best empanada recipe. A distinguishing feature is their small size, which allows them to be consumed in two or even one bite. The distinctive ingredients are boiled, diced potatoes, and chilli powder, typical of the region, which gives a floury texture and a flavour of poussin. They can be baked or fried, but a curious feature is that they are served with a spicy relish of tomatoes similar to a sangrita. If the empanada is seasoned with this sauce no doubt it will be paired with a Torrontés of Cafayate which moderates the burning palate with freshness.

Empanadas cuyanas. In central and western Argentina, Cuyo comprises the provinces of Mendoza, San Juan, La Rioja and San Luis. It is the region that produces 95% of the country’s wines and here too, empanadas arouse passions. At first glance, the Cuyo empanada stands out for its size, like the fist of a child, it is larger than that of the North and always baked. Its filling is simple: minced or sliced beef, lots of onion and bell pepper cut into brunoise, paprika, cumin, hard boiled egg, and a local speciality: green olives (usually unpitted, so care must be taken when biting into them). As the meat is dominant in the filling and very juicy – eat them seated, with legs open, to avoid staining oneself. The best companions are young and fresh reds like Malbec without oak ageing or in small doses. Other strains that achieve harmony with the same fresh character are Syrah and Bonarda.

Empanadas from La Pampa. In the province of Buenos Aires and surrounding areas, fried empanadas are dominant. The reason is that in a rainy climate, cooking in doors is more practical and hence deep fat frying is used. And while these bonaerenses empanadas do not recognise a typical recipe, they are often found with raisins and dusted with sugar. They like olives like the cuyanas -in this case without the stone- and are not spicy or hot. But: they are large, more than double the size of the Salta empanada, for example. Their ideal partners are light, fruity reds such as Malbec and Cabernet, and there are many to choose from in Argentina.

Extra Note: the urban empanada and its exotic repulgues. To date, in the city of Buenos Aires, but also in the cities of Rosario, Cordoba and Mendoza, empanadas have imposed themselves as a simple and tasty dish. Thanks to urban fast food, the array of flavours is extensive and it’s not uncommon to find strange combinations like caprese (cheese, tomato & basil), cantimpalo (chorizo), cheese & onion or distinctions between mild and spicy meat, sliced or minced. In any case, the identification of the many types of empanada is always shown in the repulgue, which differs depending on the filling. As there is no single way to do it, what normally happens is that when the empanadas are served, no one knows what they’re getting until the first bite.
And so part of the fun seems to be in being wrong!