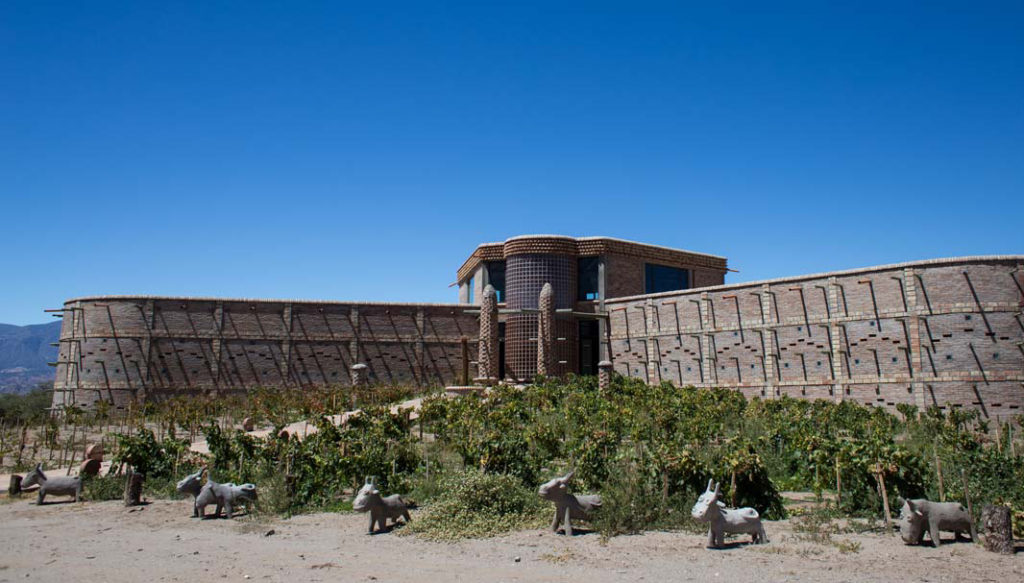 The Tucuman section of the Calchaquí Valley is prominent among iconic images of the north-west of Argentina for its stunningly colorful landscapes but also because it contains 14 wineries along the 60 mile stretch that makes up the Tucuman wine trail where a blend of ancestral heritage and an appreciation of Pachamama (Mother Earth) comes out in every glass.

The wine tourism route in Tucumán runs from Tafí del Valle to the Ruta 40 Corridor. There, the terroir is the raw material through which the grapes express the warmth and wisdom of the region’s people.

Travelers looking to take full advantage of the trail set out from the provincial capital along RP 307 to Tafí del Valle, continue on through Cuesta del Infiernillo and Amaicha del Valle and end up taking RN 40 north to Colalao del Valle.

Malbec and Torrontés can be found throughout an area that enjoys 350 days of sun a year and boasts vineyards that were first planted in the 16th century. We invite you to learn more about six of these establishments.

A major landmark in local wine history, the Chico Zossi winery is a pioneer in the region, and opens its doors on RN 40, in Colalao del Valle, to anyone who wants to get a first-hand look at their vineyards and how the family makes its high altitude varietals.

The viticultural enterprise at Las Arcas de Tolombón, run by the Guardia family, began in 2007, following an attempt to grow capers. Their Ishanka farm has a winery with a storage capacity of 1,000,000 liters and 33 hectares of vineyards planted at heights of between 5700 and 9800 feet above sea level where Malbec, Cabernet Sauvignon, Torrontés, Tannat, Petit Verdot and Cabernet Franc are all grown.

Visitors can tour the estate, taste the wines and also enjoy homemade quince jelly with blue cheese, the perfect accompaniment to a Torrontés Tardío or Rosé Dulce.

In Altos La Ciénaga, the artisanal Don Javier wine made by Julián Díaz since the 1940s provided the foundation for a winery that was restructured by his children in 1994 with the planting of new vineyards.

Today they have 4 hectares under vine and are planting two more with Syrah, Tannat, Malbec, Cabernet Sauvignon and Torrontés. In all they produce around 12,000 liters in valleys at a height of 7500 feet above sea level.

These are wines sculpted by the extreme conditions in which they were made, with hand-picked grapes, snowmelt irrigation and no agrochemicals, resulting in concentrated reds and whites with good body, color, aromas and very intense flavors that visitors can enjoy in the shade of the vines that surround the family home.

Silvia Gramajo speaks passionately about Luna de Cuarzo (Quartz Moon), an enterprise she began in 2011 in soils rich in the aforementioned mineral, which produces wines with “aromatic perfume and intensity that barely need any time in the barrel.”

“We have two and half hectares of carefully cultivated vines, tended to using organic methods, harvested during the full moon and surrounded with aromatic plants such as burrito, paico, lavender, rosemary and jarilla which lend their piercing aromas to the wine,” says the winemaker.

Of her output, the “Bio” line stands out. Governed by the cycles of the moon, it includes a dry Torrontés and a Malbec that is aged in tanks for 13 moons. There’s also Luna de Cuarzo Gran Reserva, which goes very well with traditional local cheeses made using a Jesuit recipe.

At the community winery Los Amaicha the only one in the country to be run by the descendants of indigenous peoples, the focus is on expressing the ancient richness of the soil. Gabriela Balderrama, who greets visitors together with Micaela Lera, explains that the community is run bv an organization that includes a council of elders and a Cacique.

The establishment brings together 40 farmers from different towns who collectively process between 16,000 and 18,000 kilos of grapes each harvest. The winery was founded in 2016 and has a reception area, a tasting bar, a production hall and the cellar.

“We strive to care for plants so they’ll be good for many years,” says Balderrama. The wines, made with Criolla and Malbec grapes, are sold under the brand “Sumak Kawsay”, which in the Ka Kan language means “Living Well”.

In 2010 the Spaini family from Italy fell in love with the terroir of Tucuman and began a viticultural project of about 13 hectares in size with Malbec and Cabernet Franc vines, followed subsequently by Torrontés. Today they have 120 hectares in the La Mina foothills, where they built Finca Albarossa, a boutique hotel surrounded by olive groves.

Learning about wines and much more

On the Tucuman Wine Trail one finds ceramics and textiles made by local craftspeople as well as all the iconic regional dishes: juicy empanadas, humita, locro, tamales and the unforgettable “sánguches de milanesas”.

To work off all that indulgence, one can take ecological hiking trails or go on guided horse rides or treks for up to three days. On these excursions one climbs hills and visits waterfalls and sites of archeological importance under blue skies and the watchful eyes of circling condors.

Outstanding places of interest include the El Pelao hill with its indigenous artefacts, the Los Alisos waterfall which flows over a 100 foot cliff, the Quebrada del Portugués, a natural reserve that provides a habitat for red brocket deer, peccaries, guanacos and several cat species, and La Ciénaga Valley with its mountain inn.

Wherever one goes in the area, the pleasures of a picnic on the Tucuman wine trail are not to be missed out on.

Want to learn more about the Calchaquí Valleys? Then follow this link: Redescubriendo los Valles Calchaquíes