Posted inMeet the Wineries
Posted by By Wines of Argentina 21 September, 2021 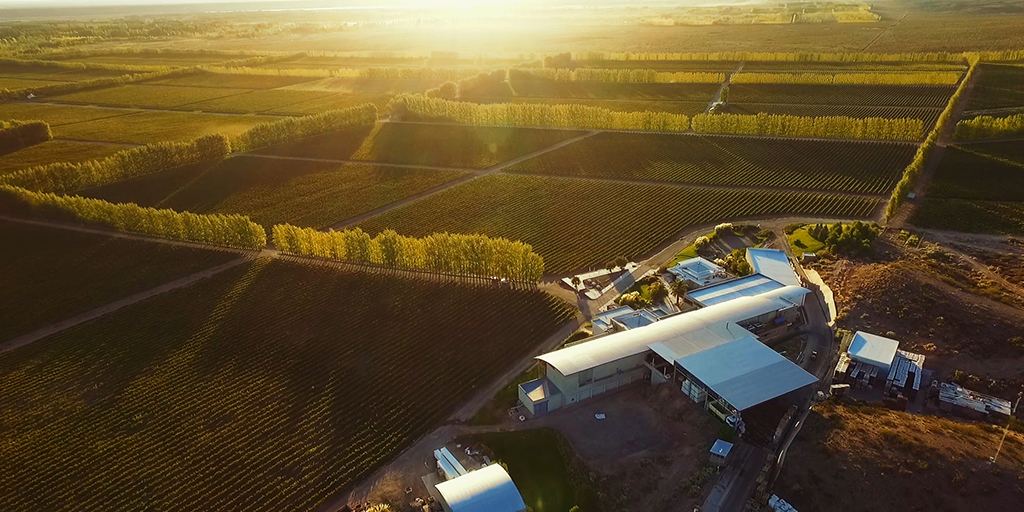 What does it take to become a specialist in Pinot Noir? It’s a question asked by many wineries who cultivate the temperamental variety from Burgundy and one in Argentina has come up with an excellent answer. Familia Schroeder uses Pinot in all their lines (sparkling, still and late harvest) from their base in San Patricio del Chañar, the gateway to Patagonia.

Founded by Herman Heinz Teodoro Schroeder and his family in 2001, right from the start the house focused on producing Pinot Noir, looking to make it one of the main pillars of their operation.

Originally of German heritage, the Schroeders planned with both their head and their heart: their head because they built the winery where the steppe slopes down into the river so they could use the force of gravity to irrigate their vines, and their heart because you need plenty of it if you’re going to tame the harsh Patagonian terroir.

The most important producers of Pinot Noir in the world tend to be located at the outermost limits of wine producing regions. In the northern hemisphere this means latitudes between 38° and 47° while to the south, because of the altitude, the range is a little larger: between 34° and 45°.

San Patricio del Chañar is located right in the middle at 39° S, a near equivalent to Sonoma in the USA.

Patagonia has a long history of Pinot Noir production. It was first planted in Río Negro back in the early 20th century and then in Neuquén, where today 239 hectares are under vine. Although Pinot Noir accounts for just 0.9% of total surface area under vine in Argentina, in Patagonia that figure rises to 10.2%, with San Patricio del Chañar boasting two thirds of all the vineyards in Patagonia.

Having put their faith in the variety, Familia Schroeder were determined to make themselves leading Argentine exponents. Under the guidance of oenologist Leonardo Puppato, who had extensive experience with Pinot Noir, following the advice of the Californian expert Paul Hobbs and using the latest technology such as open refrigerated tanks, the winery placed itself on an excellent footing.

The vineyard boasts massal selections (a propagation method in which the best examples in a population are chosen by phenotype) of vines originally from Patagonia as well as Burgundy clones such as 777 and R4 allowing them to bottle the variety at a range of price points and in many different styles throughout their lines.

The massal selections are used to make Saurus Pinot Noir in a fruity style while they are combined with clones to produce the fresher but still fruity Saurus Select Pinot Noir.

Saurus Barrel Fermented Pinot Noir is an outstanding wine made solely with grapes from cloned vines and employing a lengthier aging process.

Familia Schroeder Pinot Noir, meanwhile, is riper in style. The house also produces a late harvest red Pinot Noir and several lines of sparkling wines in which the grape is the protagonist such as Deseado, Saurus and H. T. Schroeder.

While the sparkling output is aimed at the domestic market – today they’re the largest producers of sparkling wine outside of Mendoza and mainly employ the Charmat method – the Pinot Noir reds are exported to several different countries, especially the United States.

In the years since the vines were first planted in San Patricio del Chañar in 1999, Patagonia has consolidated its reputation as a terroir that produces distinctive Pinot Noir and Familia Schroeder as a specialist in the variety.

One of the landmarks in the history of the winery was a very unusual discovery: while the foundations were being dug for the main building in the steppe, dinosaur fossils were found: the new species was named Panamericansaurus Schroederi, grew as long as 12 meters, weighed 16 tons and lived in Patagonia 75 million years ago.

Construction was put on hold while the skeleton was excavated and it is now kept in the winery’s cellar, next door to the barrel room and the entrance to the restaurant.

Today, the serendipitous find has come back to life on the winery’s labels, stretching its neck out on the bottles of the Saurus and Saurus Select Pinot Noirs.

For more of the latest news from the Argentine wine scene, we invite you to click here: Canned wine, a new trend among Argentine wineries

The Tucuman Wine Trail: A journey full of flavor, color and history

The Wines of San Juan: the road to freshness