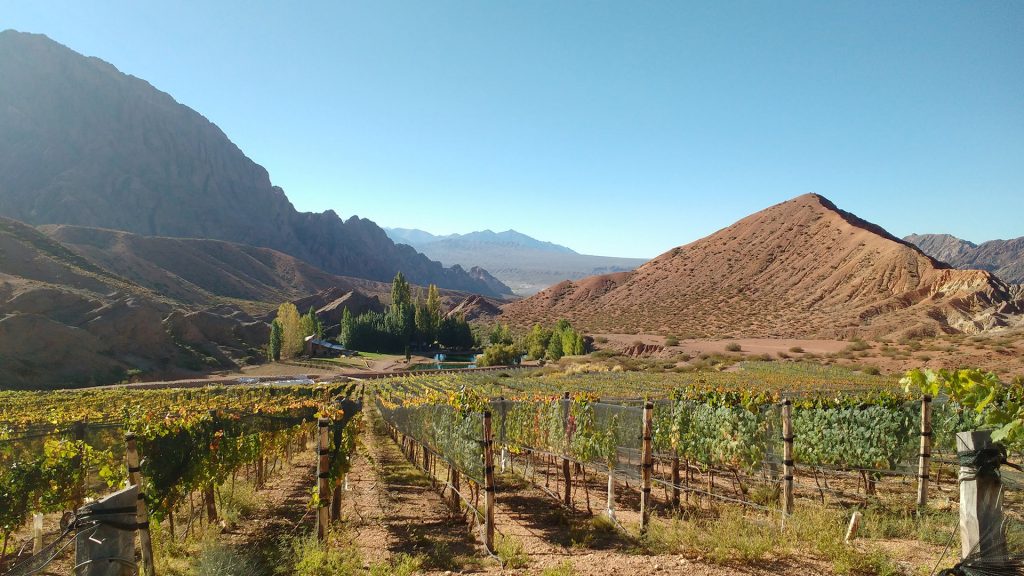 Given the sheer size of Argentina, it’s not surprising that the country contains a few record breaking vineyards. In addition to the highest and most southerly in the world, there are also several that are notable for more esoteric reasons.  Below is a list of some of the most extreme vineyards of Argentina, and also the most interesting:

The most extreme vineyards of Argentina

Above the Tropic of Capricorn. When Claudio Zucchino planted his Viña de Uquía vineyard, he achieved three extraordinary feats: it’s the most northerly vineyard in the country, located above the Tropic of Capricorn, the highest (3229 metres above sea level) and without a doubt the only one to use an abandoned mine as a cellar. This extreme vineyard is located in the Quebrada de Humahuaca, Jujuy, in the Uquía area. As if that weren’t interesting enough, the grapes are cultivated organically and the wine is made employing artisanal craft techniques.

The highest in Mendoza. One vineyard in Mendoza looks down on all the others in the province: planted at a height of 2000 metres above sea level in the small Minero ravine in Lujan de Cuyo, it’s called Estancia Uspallata. Located more specifically in a valley of the same name, it misses out on being the most westerly of the province by 500 metres (that honour goes to a vineyard in the San Pablo GI called Un lugar en los Andes), but being the one at the top certainly makes it one of the most extreme vineyards of Argentina. Chardonnay, Pinot Noir and Malbec grapes are all grown here.

Most southerly. Currently, the most southerly productive vineyard in Argentina – and the world, as far as we know – is to be found in Sarmiento, in the heart of Chubut. From its latitude at 45° 33’, it produces mainly Pinot Noir, Chardonnay and Gewürztraminer, although there are also a few Pinot Gris and Malbec vines, more of the latter. It belongs to the Otronia winery which was named after a local lake the indigenous peoples of the region call Otrón.

The eastern frontier. The Province of Buenos Aires is an enormous peninsula that curves out into the Atlantic. Very near the Chapadmalal coast, about eight kilometres from the sea, is the vineyard Trapiche Costa & Pampa: by far the most easterly of all the vineyards of Argentina. Cooled by the winds off the Atlantic, it produces Chardonnay and Pinot Noir in still and sparkling versions.

The most westerly. In addition to being long, Argentina bulges in the middle, meaning that in Patagonia, right on the valley created by the Futaleufú river, which flows into the Pacific, is the most westerly vineyard in the country. Casa Yagüe is located at a longitude of 71° 37’ in a lush area of the Andes, among native forests and wheat fields. It mostly produces Chardonnay alongside a few other grapes.

The most coastal. As strange as it might sound, Patagonia has a vineyard planted on the sea shores of Chubut. And we’re not speaking figuratively: only about 30 metres separate the vines from the sea. They were planted in 2019 in a place called Bahía Bustamante. The first harvest, in 2021, wasn’t on a commercial scale, but the wines are made by the renowned oenologist Matías Michelini.

In addition to extreme geographies and frontiers, human factors can also produce out of the ordinary vineyards. Below are three examples of distinctive winegrowing projects:

Strange soils. In the Province of Córdoba there is a vineyard whose distinctive terroir is definitively man-made. Its name is Alma Minera, and it belongs to Fluorita Córdoba, who decided to begin an environmentally sustainable project amid the rubble of an abandoned mine back in 2014. It involved a six hectare vineyard, planted 1300 metres above sea level. The first harvest was in 2018. On average, the area gets about 1000 millimetres of rain every year but the rock from the mine makes for perfect drainage. The vineyard produces 3000 bottles a year.

Unusual terraces. In Primera Zona, the area of Mendoza made up of Luján de Cuyo and Maipú, vineyards are planted at a height of between 650 and 1000 metres above sea level on what for all intents and purposes is a rather flat, featureless landscape. The planting surfaces around here are levelled to make work easier but also to facilitate the delivery of water via aqueducts and channels.

This is why Amansado Wines’ Viñas Heroicas vineyard stands out: its vines are grown on the slopes of the Cuchillas de Lunlunta hills, on the kind of terraces we’re used to seeing in Rhône in France or the Ribeira Sacra in Spain, only with the Andes as a backdrop. The unusual landscape makes it one of the most extreme vineyards of Argentina

The oldest. It’s hard to determine definitively which is the oldest producing vineyard in Argentina but the clues point in two directions: one owned by Colomé in Molinos, Salta, was recorded as having vines that were already old back in the mid-20th century and the size of the trunks would appear to back this up, while the original winery was founded in 1831. Meanwhile, in Mendoza, the González Videla winery has been active since 1856 in Panquehua, and the original vines still surround the building.

Did you find this article about the most extreme vineyards of Argentina interesting? Why not learn a little more about Argentina winemakers? Argentina 3D, Winemakers Sessions