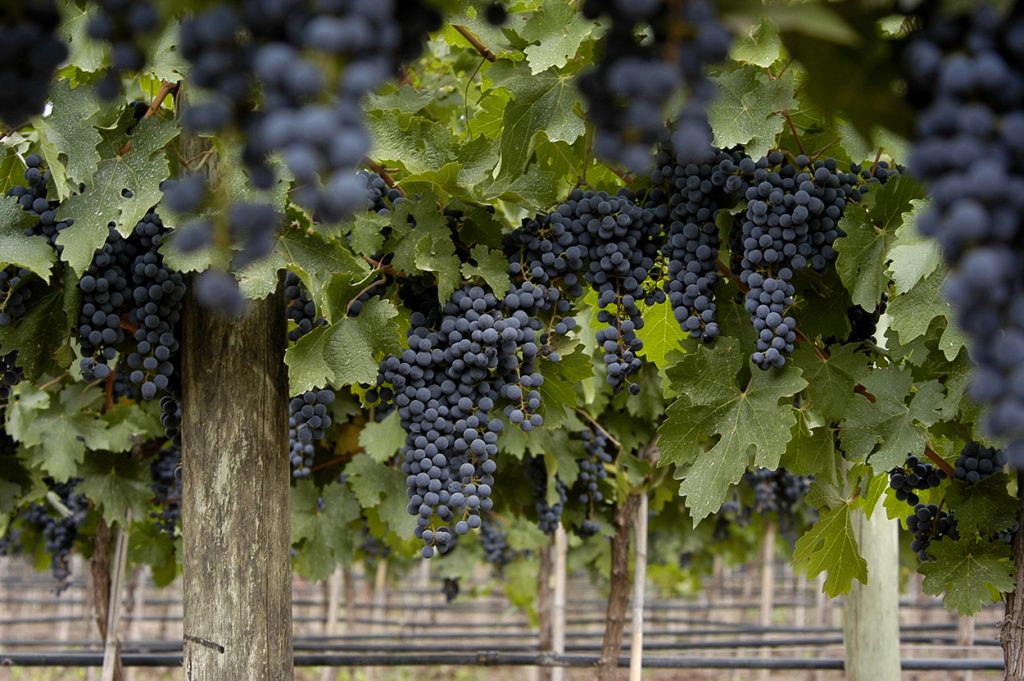 Argentina is red wine country: red grapes account for 54.3% of vineyards, the country’s most famous wines are reds and the most popular grape variety, Malbec, is, of course, red.

But beyond the well-trodden world of Malbec, what other varieties are grown and where? What are the most common red grapes in Argentina?

Part of a more general guide to the vineyards of Argentina – using statistics from the National Institute of Viticulture – here’s everything you need to know about red grapes.

A rundown of the most common red grapes in Argentina

Malbec is by far the most common red grapes in Argentina, although its rise only began in the 1990s when it spanned just a quarter of its current surface under vine. It’s found all around the country, from Jujuy to the deep south of Patagonia but is concentrated in Mendoza, where 85% of the country’s Malbec vines are planted.

Side note: 15.7 thousand hectares have been planted in the Uco Valley in the last 40 years in areas where the moderate to cool climates have reinvented the grape’s flavour profile. The valley now produces a third of all Malbec.

Also known as Charbono and Corbeau Noir, this grape was mistaken for other varieties in Argentina until 2009 when its true identity was revealed following DNA analysis.

Originally from Savoy, in Argentina Bonarda tends to be planted in the warmer, more productive areas where it produces simple, fruity, medium-bodied wines. 83.5% is grown in Mendoza, with San Juan accounting for 12.3%.

Only 1680 hectares (9%) are grown in moderate to cool regions meaning only one in ten bottles are offer an alternative, fresher style.

The third of the most common red grapes in Argentina is the most extensively planted variety in the world. Originally from Bordeaux, in Argentina it is mostly found in Mendoza, which accounts for 76% of Cabernet Sauvignon under vine, followed by San Juan with 9.9%, La Rioja with 5.4%, Salta with 3.25%, Catamarca with 2.2% and Patagonia with 2.6%, mostly in Neuquén (1.9%).

The geographic range along with the fact that almost all Cabernet is planted in moderate to warm regions that suit its long ripening cycle define the range of flavours produced by the variety.

The most distinctive Cabernet Sauvignons come from the north where roasted red pepper notes are joined by intense spicy aromas not found anywhere else in the world.

Although DNA analysis shows that Syrah is a French variety, it was named after an ancient Persian city.

Originally from the Rhone Valley, Syrah – and its Australian variation Shiraz – adapts well to hot climates so it is mostly planted in warmer regions: the departments of San Martín, Lavalle, San Rafael and Rivadavia in Mendoza alongside 25 de Mayo, Sarmiento and Caucete in San Juan account for almost 60% of Syrah under vine in the country.

This means that most Argentine Syrahs offer a nose of dark fruit, are full bodied and low in acidity. However, a minority (8%), less than one bottle in ten, comes from cooler areas making them pleasant oddities with greater freshness and fleshier notes.

The grape that made Rioja famous comes in at number 5 of the most common red grapes in Argentina.

In contrast to other varieties, 95.3% is planted in Mendoza, two thirds of which are grown in hot regions where the grape responds well to the climate. But it’s the other third that’s really interesting: located in the Uco Valley, especially San Carlos (660 ha) it develops more tannins and structure to make for long-lasting wines that grow velvety when barrel aged.

Two thousand hectares of these vines were planted over 40 years ago, while another 2.6 thousand are older than 10, meaning that the vast majority of Argentine Tempranillo comes from old vines. However, it can be quite hard to get your hands on.

The queen of Pomerol and Saint-Émilion finds the terroirs of Argentina a little exotic but welcoming nonetheless. Far from the clay soils of Bordeaux, Merlot is planted throughout Argentina, in very different, sometimes extreme locations.

A third of Merlot vines are located in moderate to cool areas in Mendoza, another is scattered around warmer areas in the same province, while the final third is located in other provinces, especially Patagonia where the clay-based soils in the valleys of the Neuquén and Negro rivers offer optimal conditions for the 411 hectares that have grown there for more than 20 years.

Known as a ‘dye’ grape due to its ability to enhance the colour of blends, Aspirant Bouschet – a cross between Gros Bouschet and Aspirant Noir bred by Henri Bouschet in 1865 – is a French variety grown almost exclusively in the warmer areas of Cuyo.

Because other grapes often lose their colour in the heat, having a dye grape around comes in handy. With its fruity aromas and rusticity, it is mostly used in blends although you occasionally see the odd varietal from the east of Mendoza.

Originally hailing from Italy, Ancellotta is a red variety grown extensively in the  Emilia Romagna region to make Lambrusco. It first came to Argentina in 2000.

Originally grown for dye purposes, mostly in Mendoza where the majority of its 1914 hectares under vine are to be found, today it is used to make rather exotic varietals with interesting results, especially in San Juan and Salta.

The iconic grape of Burgundy, Pinot Noir is grown in cooler regions because of its brief ripening period and also because these climates best preserve the freshness that give the wine its zing.

Argentina is no exception in that regard. 73.6% of Pinot Noir vines are located in Mendoza with the Uco Valley accounting for 1060 hectares; more than half of all the Pinot Noir in Argentina.

Of these, Tupungato, the highest, coolest department in the Uco Valley, contains a third of the entire surface area of Pinot in the country while a fifth (358 ha) is grown in Patagonia.

The tenth most common red is Sangiovese (1390 ha), almost all of it located in Mendoza. 1214 hectares of the grape variety under vine were planted over 40 years ago while only 10 hectares have been planted in the last decade.

Do you like the reds of Argentina? Why not read a little more about our whites? Argentine Chardonnay, an increasingly alluring choice

Altitude/latitude: an anagram that can also be used as a guide to the different terroirs of Argentina