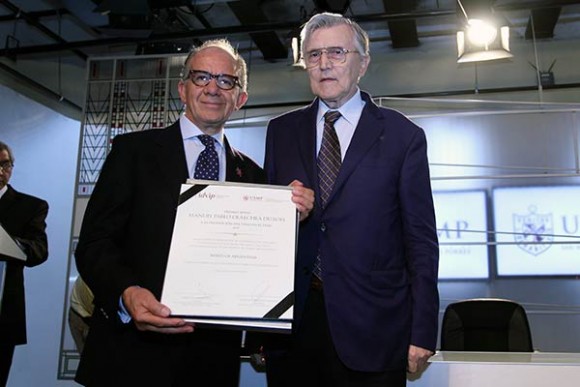 The Institute of Wine and Pisco of the San Martin de Porres University announced on March 26 the introduction of the Manuel Pablo Oleachea Du Bois award to recognise individuals and institutions dedicated to the promotion of wine in Peru.
The name of the award is in recognition of the Peruvian family that has kept the tradition of winemaking alive since the sixteenth century.

The ceremony was attended by the authorities of the Institute of Wine and Pisco (IDVIP) and the San Martin de Porres University, and important people in local and international winemaking.
In the category of “international organisation” Wines of Argentina was recognised for representing a unified and integrated sector in international markets, and for their penetration work in Peru, where Wines of Argentina ranks first in the list of international suppliers of wine.
The other two winners were chef Pedro Miguel Schiaffino and editor Carlos de Piérola.
Schiaffino has been dedicated to the rescue of the gastronomic traditions of the jungle in his restaurants AmaZ and Malabar, and has also given priority to Peruvian wines on his menus.
Meanwhile, De Piérola has promoted the culture of wine for several years and is one of the most influential people in the rescue of Peruvian wines, which represent 80% of consumption in the Andean country.
During the award ceremony, the Dean of the Faculty of Sciences of Communication, Tourism and Psychology, Johan Leuridan Huys, highlighted the pioneering work being done by the IDVIP for the past 13 years, which has allowed it to be the benchmark in themes of wine and pisco in Peru.

Eduardo Dargent, director of IDVIP highlighted the contribution of the winners.
Referring to Wines of Argentina, he said that since its creation in 1993, Wines of Argentina has been promoting the country brand and image of Argentine wines around the world, and its work has become an international example.
Representing Wines of Argentina was Hugo Sabogal, the representative of Wines of Argentina for Latin America.
The name of the prize “Manuel Pablo Olaechea Du Bois” was chosen to highlight the trajectory of the man that was the godfather of IDVIP. Olaechea was a promoter of the Peruvian wine industry, especially through his renowned company Viña Tacama.

Malbec of Mendoza: diversity of flavours