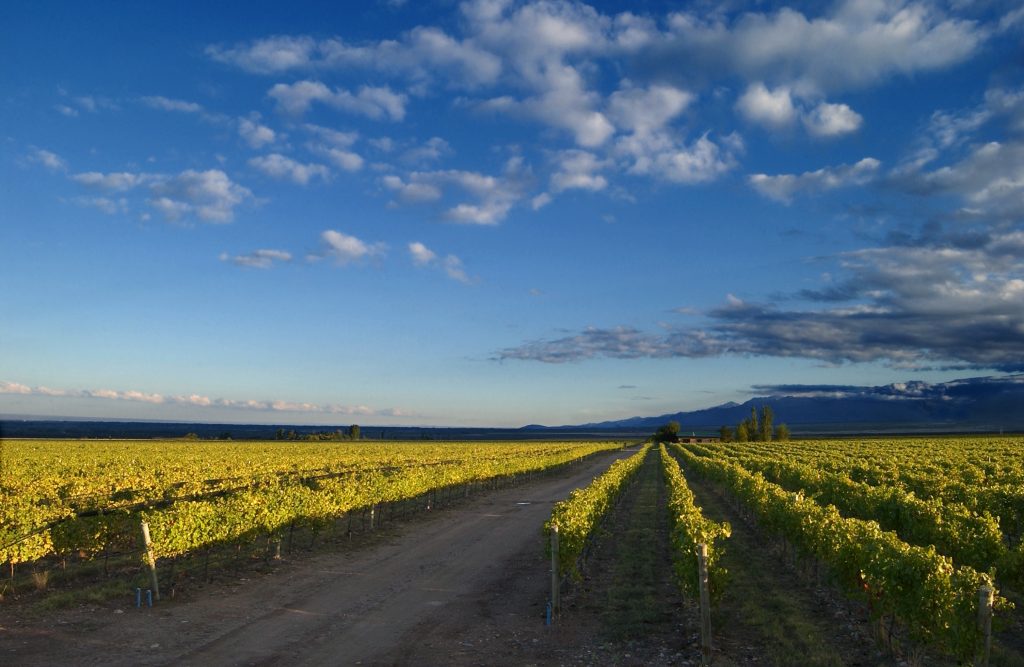 On the three computer screens are the schemes of a finca (farm). On the one on the right, green, red and yellow spots represent the vigour index of the plants. On the middle one, there are points of various blues which detail the temperature of each sensor in the vineyard. On the third one, in the form of coloured lines in the direction of the grooves, there are orange or yellow lines depending on the electrical conductivity of the ground.

The three monitors are installed in the middle of Finca La Colonia, at Bodega Norton, in Agrelo, and together they form the core information by which Fincas Manager, Pablo Minatelli, focuses on the production for the 2015 harvest. “What we do with this information, is make better decisions –  he explains – using all the technology that is available in the world of wine, we are able to see what is happening at almost every level of the plant, and that allows us to be very efficient in the management and handling of over six hundred hectares of land with which we work, “he says.

What Minatelli and his team do is called “precision viticulture”. A concept that has gained much ground in Argentine wineries in light of new technologies which have become available in the last decade. In short, it consists of monitoring the vineyard using three novel tools in the world of wine: growth rates by infrared measurement, known by its acronym NDVI (The Normalized Difference Vegetation Index); the electrical conductivity of the soil; and its correlation with the humidity and temperature in the vineyard. A wealth of accurate data that, at the time of obtaining quality grapes, is key.

While nothing can replace the direct observation of an agronomist in the finca, in recent years aerial photography has gained ground in order to assess the rates of plant growth. In short, it is a flyover the vine blanket –  it can be done at ground level, but it is essentially equal – and a picture is taken of the vines. But not just any picture. One in which the deflection of certain ranges of light is analysed and processed and can determine in which areas there is photosynthetic activity and even growth, or the opposite.

Under the tutelage of Marcelo Belmonte, Viticulture Manager at Bodegas Trapiche, there are nearly a thousand acres of vineyards, ownedandothers. And every January, while the rest of the Argentines take vacations, he and his team receive the first images of NDVI. “What interests us is  how even a vineyard grows, and what they are like at the time of ripening, when the grapes change colour and define their growth pattern, and the harvest decisions,” he says. But which?

In principle, in the vineyards destined for the high end wines, “we segment parcels of equal vigour. This allows us, at least theoretically, to know which parcels of Malbec ripen at the same time. And with this schedule, the harvest is fairly exact. Of course it is not the only variable, “explains Marcelo Belmonte. For this photo, is only part of the truth.

It seems obvious, but plants are nourished by what lies beneath the surface of the earth. In the soil, between rocks, sand, clay and silt – which together form the texture of the soil – there is a diverse availability of minerals. And the ability of the plant to grow depends on these. Especially the availability of Nitrogen, Phosphorus and Potassium.

Minatelli expresses it clearly: “if you only look at the aerial photo, we see a part of the film.” Because what it shows, is the growth rate should have a correlation underground. In such a way that “the harvest parcels, in addition to responding to the vigour of the plants, which is what we see in the aerial photos, they are determined by soil type,” he explains.

How do you know the type of soil? On the one hand, by direct observation. You dig a hole in the vineyard – he calls them pits – and study the composition, texture and depth to which the moisture and roots reach. Of course, the hole is just a small stamp on a large estate and is not representative of the entire surface.

As the capacity of electricity to cross the soil depends on water and salts that are dissolved therein, the mineral composition can be deduced and therefore so can the availability for the plants. “Between soil pits and soil conductivity – explains Belmonte- we have a good idea of what is available to the plant,” he says.

That’s exactly what the central display shows, located in the department of research led by Pablo Minatelli. To the untrained eye, the colours do not say much beyond certain tonal regularities. But for this agronomic engineer, it holds the secret of the harvest and the tillage for the upcoming year. “We parcel the vineyard according to strength and balance, he says, and with that we manage to isolate the main variables of plant growth to obtain even maturity. With this plan in mind, from the month of January we walk around the vineyards, to observe what the monitor does not display, in order to learn more “.

These facts and figures, added to the stations and sensors that monitor soil and air temperature, relative humidity of the soil -up to 1.5 meters deep – and relative humidity, and weather forecasts – which now predict up to fifteen days in the future- form a complex cloud of processing. But, computers offer a model that, year after year, and with real experience, gain sharpness and precision. Incidentally, this explains, the name of the method: precision viticulture.

After a decade or more of research, for example, it now understands the details of each terroir and the ability of each sector of the vineyard to give rise to different wines. At the same time, precision viticulture can work towards the future. Where the soil is poor in organic matter, apply compost to improve the availability and texture. Where the vineyard lacks vigour, use a different style of pruning, with less buds, so that the plant does not waste energy- and instead obtains even maturity. Or, in areas that produce really special wines, understand the causes and find out how and where to replicate them.

Because that’s the underlying issue: achieving balanced grapes that match the wines you want to make. Something that, beyond the technologies available for analysis, continues to be an absolutely aesthetic and personal affair. In short: what we like cannot be decided by a machine. And when it is time to convert grapes into a triumph of flavour, monitors, measurements and aerial photos are an accurate but not a complete guide. Luckily for winemakers and engineers, who are still responsible for the decisions and criteria.

Trend: In Argentina new terroirs are emerging in unexpected areas