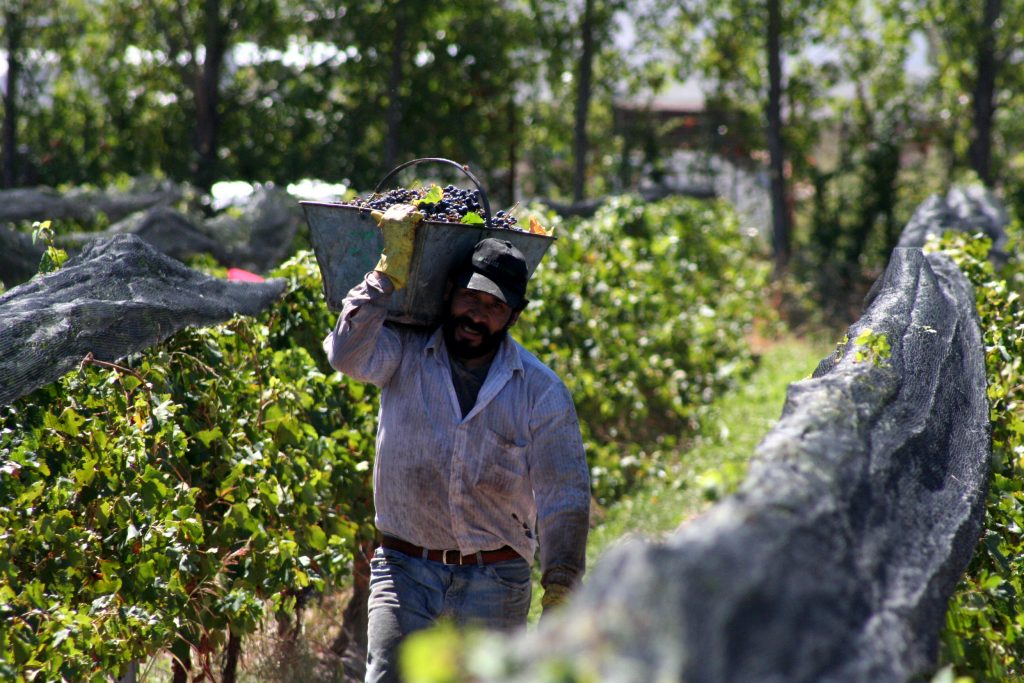 In late November a new project of oceanic wines in Argentina, was presented. Hold on… Oceanic? Yes: wines grown next to the sea and produced by a winery located as far away from water as Mendoza can be from the Atlantic Ocean. And if the data itself is curious, even more so is that this is a new Atlantic winery and it is redefining the map of Argentine terroirs.

The move is relatively recent. Until the 1990s, when the planting of vines was deregulated, no vineyard could be established in Argentina outside of the stipulated provinces, such as Mendoza, San Juan, La Rioja, Catamarca, Salta and in other extremes, Rio Negro. With the change in legislation, however, new ventures were created. Of course, there are many difficulties in creating new wine regions: no expertise, or people with experience, and the need for other varieties – Gewürztraminer, Riesling, Pinot Noir, Tannat- so new wineries develop their own learning curve which results in them investing double the time.

Some however, already have commercial lines in the market. And the landscape of wine, at least for now, has something new to add to the books, magazines and websites. It’s true: these new regions represent less than 1% of Argentina’s total vineyards, but then again, the other 99% also started from scratch. Coming up, the new Argentine terroirs…

OCEANIC WINES
Buenos Aires. The largest and most populated province of Argentina is also progressing with a new wine business. Located in the Pampa Húmeda (Humid Pampas), a vast and rich green plain born on the shores of the Atlantic Ocean.
Within its broad geography, two regions stand out. On one side, Sierra de la Ventana, in the south, home to more than 50 hectares at about 100km from the sea and at a height of 500 meters. In this zone the oceanic influence comes in the form of a breeze and thanks to a fertile environment, the landscape resembles European vineyards and countryside. The nearby towns of Tornsquist, Tandil and Médanos, also have vineyards.
On the other side is Chapadmalal, four kilometres from the sea and a few more from Mar del Plata, a seaside resort, par excellence. According to Daniel Pi, Chief Winemaker at Trapiche, “the conditions here are similar to those of New Zealand’s vineyards.” This puts the focus on this Argentine wine group to develop vineyards of Pinot Noir, Riesling and Gewürztraminer plus Malbec, Merlot, Cabernet Franc and Cabernet Sauvignon.
With high rainfall, more humidity and sandy loam soils with silt, it makes this region the only one in Argentina that can cultivate vines without artificial irrigation. Both areas now have commercial wines on the market like Ventania, from Bodega Saldungaray in Sierra de la Ventana, Terrasabbia, from Bodega AlEste in Médanos and Mar&Pampa from Bodega Trapiche.

Rio Negro Coast. In this province, between the Rio Negro and the Rio Colorado, the winemaking business has been going for more than a hundred years. But in recent years new vineyards have been cultivated on the Atlantic coast of the province. More precisely Viedma, the provincial capital, where Marcelo Miras, one of the leading winemakers of Patagonia, began advising a venture located just six kilometres from the sea, on the right bank of the Rio Negro. What distinguishes this region from other oceans is the aridity of the climate which means the vines must be watered and offers a curious mix between desert and sea. Bodega Océano Patagonia is the only active winery there, for now.

SERRANO WINES
Córdoba. Located in the centre of the country, it is the second largest province in population, with a thriving capital city and a landscape marked by mountains. The mountainous terrain, with good rainfall and offering granitic and metamorphic soils, has two well-defined areas: Calamuchita, which runs through the central massif, and Traslasierra, towards the western plains. With a handful of wineries in development at roughly a 1000m.a.s.l and some 70 cultivated hectares, some notable strains are Malbec, Merlot and Cabernet Sauvignon which have their own niche in the market. Among the producers, Nicolás Jascalevihc in San Javier, Bodega las Cañitas from Calamuchita and Jairala Oller from Ischilín. Of particular expression, their wines are soft and light, different from those of Cuyo.

San Luis. In the demographics of Argentina it is a small province, with some hilly landscapes, crossed by stone cairns built by pre-Columbian cultures. San Luis has only a decade of grape growing history and one unique product: Finca La Larga. It has 33 hectares in production in Santa Rosa de Conlara, an hours drive from the border with Mendoza. At 630 meters above sea level, the area is characterised by moderate temperatures, cool nights and hot days. The strains are Tannat, Syrah and Viognier.

THE NEW PATAGONIA
Chubut. Located in the heart of Andean Patagonia, the Hoyo de Epuyén is an earthly paradise. A wooded area with snowy peaks and glaciers, with about one thousand millimetres of rain per year. A cold but very dry region in summer, which now covers 26 hectares of vines on the hillside with a good gradient that allows them to withstand the cold winter temperatures. Even though the vineyard is only a decade old, Riesling, Pinot Noir and Merlot show the best results. The project is owned by Bernardo Weinert, who also owns the Mendoza winery that bears his name.
But the new Patagonian wine business does not end here because in the town of Sarmiento, in central Chubut, a new project has started cultivating short-cycle varieties such as Chardonnay and Pinot Noir, defying the geographical limits of our winemaking.

La Pampa. At the extreme north of Patagonia, is the Pampas town of May 25, a barren and inhospitable region where the Loson family have been cultivating 140 hectares of vineyards for just over a decade. A real challenge due to an arid continental climate of cold winters. With the advice of the American Paul Hobbs, the winery produces the main varieties of Argentina.