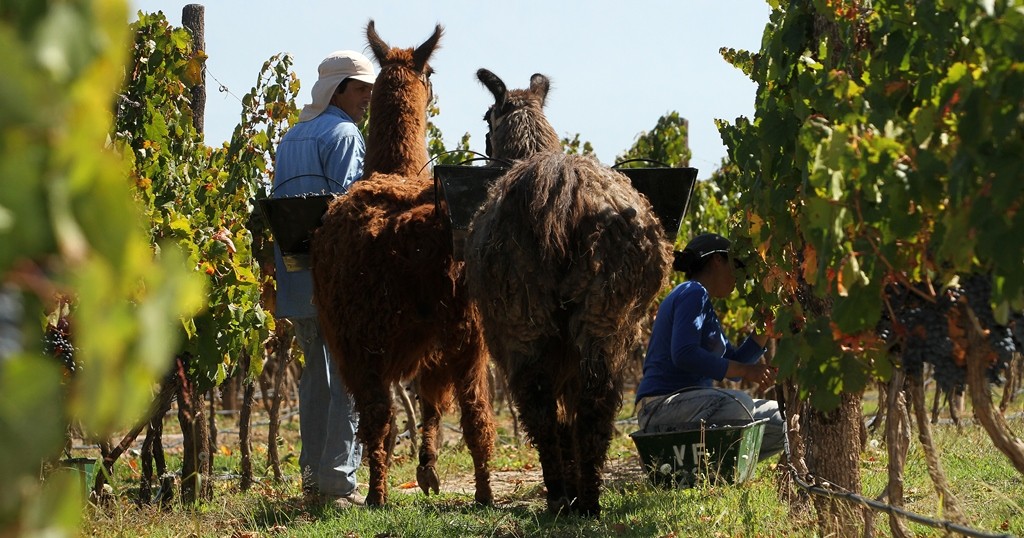 A flock of sheep roaming the vineyards and a llama sleeping under the shade of a poplar are the welcoming committee for a group of visitors at Bodegas Krontiras. Surprised by the scene, they forget the picture postcard setting of these Maipu vineyards, with the snowy peaks of the Cordillera in the background, and start snapping away at the curious situation in front of them, which has just been joined by a family of geese flapping among the vines. They simply can’t believe their eyes. The oenologist, Maricruz Antolin invites them to tour the vineyards and discover the secrets of biodynamics.

Biodynamic practices were established over a hundred years ago by the Austrian Rudolf Steiner. His teachings promote the care of natural resources and the implementation of ecosystem-friendly agriculture, synchronised with the lunar phases and the hypothetical influence of the cosmos. It also encourages the use of natural preparations that replace chemicals for fertilisation and pest prevention. “In biodynamics, we think of the vineyards as a living system, our goal is to develop a totally natural cultivation,” says Antolin.

The idea behind this philosophy is to improve the soil with living organisms and with preparations that are developed using natural products such as quartz powder, flowers and tree bark, and with the support of the animals, a kind of harmony is created with the land. On this last point, Argentina appears to be favoured. “The environmental conditions of our regions are ideal for biodynamic cultivation, free from pollution and contamination, with rich ecosystems,” adds Alejandro Kuschnaroff, winemaker at Ernesto Catena Vineyards, a winery which has launched four biodynamic labels this year.

The first winery to obtain Demeter certification, the international stamp for these practices, was Colomé in 2008. It took at least seven years from the conversion of the vineyards and the adaptation of the winery, which shows that converting to biodynamics is a long term plan. According to John Buzzio, manager of Demeter Foundation Argentina, “the wine industry has the greatest potential in the country for biodynamic practices.”

Buzzio says there are several wineries on track to earn their certification. Next to Colomé, are Krontiras, Alpamanta, Chacra and Noemía, the pioneers of this movement in the country today. Two others which have recently joined them are Ernesto Catena Vineyards and Escorihuela Gascón, each with bio wines from the Valle de Uco.

“Our commitment to biodynamics is founded on the possibility of keeping the characteristics of the terroir intact and protecting the identity of the vineyards,” says winemaker Matthias Ciciani Soler.

With the focus on European markets and the United States, more than ten wineries have biodynamic wines arriving in stores specialising in natural wines.

In Salta, the wine-growing region of northwestern Argentina, Bodega Colomé was one of the first to disclose these practices. Today only its Colomé Malbec Reserva is made in this way with grapes from a vineyard located at 2,500m. Next to it, in Angastaco, Finca el Recuerdo produces its Pucará Malbec, whose few bottles can even be found on the wine lists of some Parisian restaurants.

Mendoza, as you would imagine, is where the largest number of producers of bio wine can be found. Krontiras in Maipu, is the only winery in Argentina whose building was built according to biodynamic principles. Here they make the Doña Silvina range which, apart from Malbec also offers Petit Verdot and Aglianico. Bodega Cecchin is another in the area, known for promoting these practices for over a decade.

Alpamanta in Lujan de Cuyo, is also included on the list of pioneers. Its portfolio offers fifteen certified labels, among them its varietal Natal and the newer Brevas, a white and a rosé made with whole fruit in concrete eggs and bottled unfiltered, real rarities.

In the Valle de Uco, in addition to Escorihuela, with its Organic Vineyard Malbec, Ernesto Catena Vineyards has just introduced its line of biodynamic varietals, Siesta in Tahuantinsuyu. Among the most innovative projects are Luna Austral, whose wines are made by renowned consultant of biodynamics, Alvaro Espinosa, and Chakana, with its wine Ayni.

In Patagonia, Hans Vinding Diers is an expert of organic and biodynamics since he launched his winery, Noemía, specialising in high-end Malbec. Meanwhile, Chacra is another project that respects these processes in their world famous Pinot Noir. In 2014 Chacra launched their Pinot Noir Sin Azufre.

To date, the number of biodynamic wineries is increasing slowly but steadily. “Every year, we organise a Biodynamic conference between Argentine and Chilean wineries, and those who come to hear our progress are increasingly interested,” said Maricruz Antolin, host of the 2015 meeting in Mendoza. The most enthusiastic imagine that in the next few years the number of biodynamic producers in the country will reach twenty. And so, to the picture postcard of the Cordillera and vineyards, one must add some cows and a few more sheep.