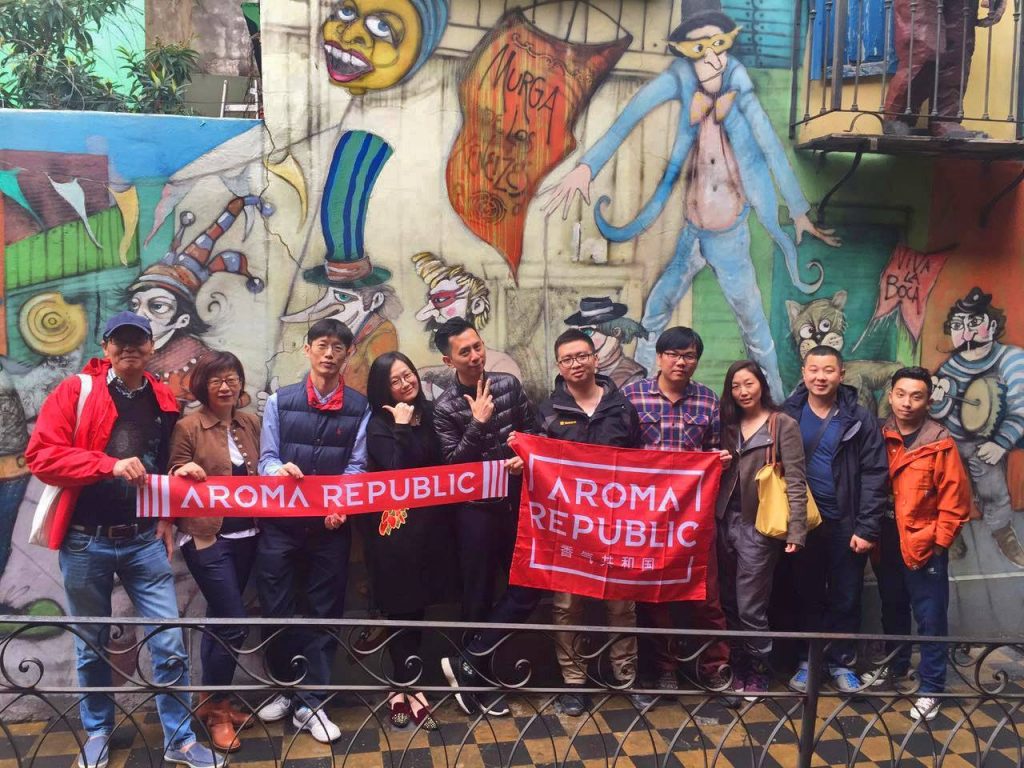 Between 7 – 21 August, Wines of Argentina received a group of 11 teachers from AROMA REPUBLIC.

Founded by Joyce and Terry XU in October 2015, Aroma Republic has successfully organised more than 100 events related to wine and providing unique experience to its customers.

Their business model is based on a “Win – win” relationship, uniting the global associations of wine producers, wine trading companies, wine experts, KOL (Key opinion leader) and other industry experts. Working together with official partners from 26 cities through a mode “Online-to-Offline Loop”. They provide a professional and outstanding experience in training, customised tastings, pairings and workshops with other industries.

Here are the comments about their visit:

What was your perception of Argentine wines before you came to our country?
T: Before coming, I think Argentine wine enjoyed a high than average quality due to the suitable climate. However, it’s lack of diversity means that mostly Malbec and many other wines taste similar to each other.
J: Before I came to Argentina, there wasn’t a clear definition about Argentina as a country, in my mind, Argentina is a country similar to South Africa, kind of chaotic, which is not a good impression. Also in the meantime, I had no idea it was so far away from China, even if it is next to Chile. But now I have new deeper image of Argentina after this trip.
Also I discovered that Argentina has so many immigrants from Europe and is a country with deep a cultural background.

What do you think about Malbec?
T: Malbec is super suitable for making fruity and juicy styles of wine. And with the professionals or when the vine gets old enough or when it is blended in the right portions, Malbec can show a great depth and complexity which can be compared with any of the greatest wines in the world.
J: Well, I found that the wines are more expensive, compared with Chile. For Malbec, I did not have a clear definition. International people would like Malbec more, because in China it is still not that common. Previously I never thought of using the word elegant to describe this grape, but now I know more about it.

Which varietal stood out for you?
T: Beside Malbec and Torrontes which are the flagships of Argentina wine, I really love the Tannat and Petit Verdot which can ripen slowly and perfectly in Argentina then develop both savouriness and wildness in the wine.
J: Personally, I prefer Bonarda, a kind of special variety for me, even if everyone says they like Torrontés. But it is hard for me to give that variety a definition.

What do you think we should do to improve our performance in the Chinese market?
T: Argentine Malbec is well-known already in China. Now I think we can go directly to the heart of wine which is PEOPLE. China is a country with long history made up by different people, emperors, poets, craftsman and wine is all about people in the end. Therefore, let’s tell stories about people, who grow the vine and who make the wine and who have been shipping them to China from thousands of miles away and keep theming in good condition until the moment they are poured into the glass in front of each of us.
J: First, Argentine wineries and their wines need to tell stories, the information / stories behind them let more people be moved by them. In the meantime, they should get more people to come to Argentina to have a different impression/ feeling for this country.

The Chinese market currently imports 1.9 million dollars annually. Argentina occupies 10th place as an exporter of wine in the country with a 1% share in bottled wine exports.

Given that China is a very new country regarding wine consumption, the promotional strategy of Wines of Argentina is to continue positioning the generic image of the country. That is why, since 2013, it has been developing an educational program for the trade.

It participates in regional and international fairs (Vinexpo, HK Wine & Spirits Fair), plus tastings and events which are organised within the Malbec World Day framework. As well as this we are working on opening new markets (e.g. Second Tier Cities) and organising events such as the China Roadshow, which consists of a tour of various Chinese cities where the culture, history, gastronomy and wines of Argentina are presented through activities such as tastings and masterclasses.