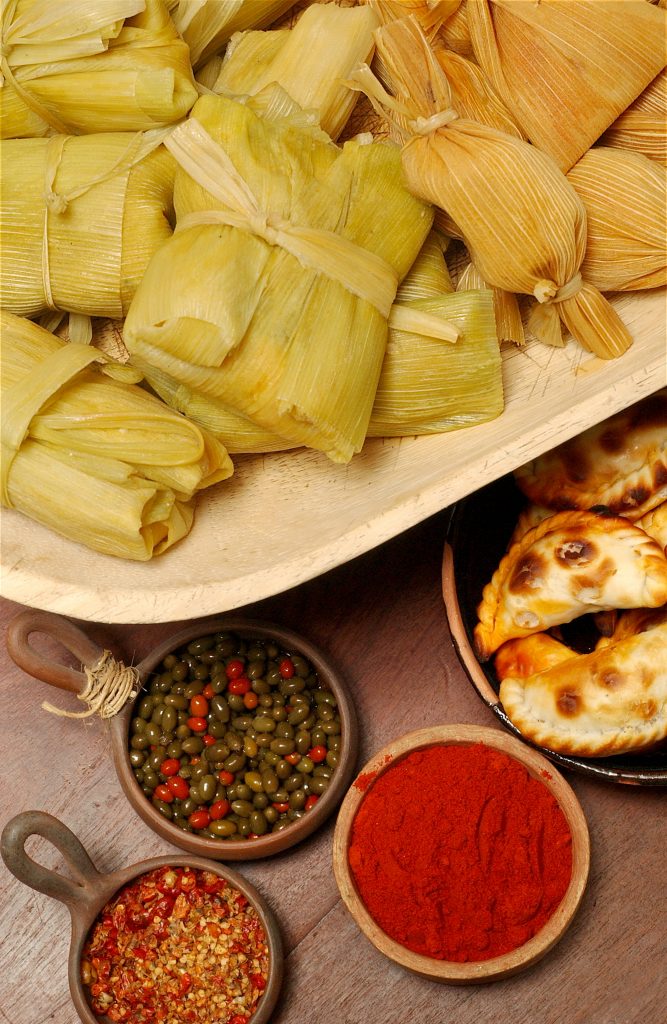 More and more these days chefs are setting foot in the fincas of Mendoza, carrying their pots and pans and planting themselves firmly under the shade of Jacaranda trees along the Paraná River or catching one of the thousand trout jumping out of the rivers in Patagonia. Their motivation lies in finding homegrown flavours, the local colour.

There are guys like Martin Molteni, Walter Leal and Fernando Rivarola or chefs like Dolli Irigoyen and Soledad Nardelli looking for native flavours. They have written about them: from Fernando Trocca with his book Cocinero, a Producto argentino, to Dolli, and Nueva cocina argentina, from the journalist Pietro Sorba. The idea of a cuisine with regional flavours is gaining strength. To find out more about them just look out for the dishes and try some of them. So hit the road and get your taste buds ready.

Spices of the NOA (Northwest Argentina)

The Northwest region, in the rugged Andean valleys where the Condor flies, is the most intensely fused area of pre-Columbian cultures and recent history. It offers techniques and products with a prior to the modern kitchen, which chefs like Molteni and Leal are exploring. For example, carob beans, peppers and chillies, beans, quinoa and potatoes are used, which have been in the area a few millennia.

These spicy, slow cooked stews have the wild flavours of dry meat similar to beef jerky. While cumin, with its Syrian-Lebanese origin, brought by immigrants in the twentieth century, is today found in the most typical dishes of Salta, Jujuy, Catamarca and Tucuman.

Empanadas with potatoes, locros (pumpkin based stew) with salted meat, tamales and humitas make up the ABC of corn in their preparations. And like quesillo -a sort of local mozzarella – accompanied by marmalade, one can also find Carob jams, the fruit of this wild tree: a dry, sweet pod from which one can extract a type of flour for making dough. These are all flavours that should be in the logbook of any traveller.

The flavours of the jungle

In the Northeast, it stretches to the wide, leafy Mesopotamia, between the Uruguay and Paraná rivers, with thousands of tributaries. It is a vast area of swamps, jungles and mountains, where the Caiman and Tapir splash around in the Iberá river, whose torrents rain into the Iguazu Falls or rush into the Moconá.

In the kitchen, one sees the Guarani heritage. Rarities include cassava and Jacaratia. The first is a sort of fibrous tuber that replaces the potato in this cuisine. And Jacaratia, a rare wood that is candied and eaten.

In this aquatic environment, river fish include pacú and dorado, to mention two well known ones, that get ten points on the grill. There are also tropical fruits like papaya and passion fruit. But if there is a product that represents Mesopotamia best, it is yerba maté, with its center in the provinces of Corrientes and Misiones, the cultivation of this leaf, dried and ground, gives rise to the tea most consumed by Argentines; Maté, second only in volume to water.

From Tierra del Fuego to the Rio Colorado are the rugged plateaus of Patagonia, with two parallel fronts; the Andean forest in the West and the Atlantic Ocean in the East. In the first and its immediate surroundings, large quantities of fine fruits are produced; raspberries and blueberries, calafate and elderberry, tiny and well tasty. From them, for example, the cook Marian Müller prepares refined vinegars.

Fruits like apples, quinces and cherries are also grown in the Andean valleys, especially towards the steppe. Dolli Irigoyen has a complete recipe book about it -as well as vineyards in the Alto Valle del Río Negro and Neuquén.
Rainbow trout, along the entire route are exceptional. From the Steppes, famous Patagonian lamb.

On the coast, there are some very specific products. Spider crab is acclaimed worldwide for its delicate marine flavour. Also, the prawns from Chubut, big and tasty, chef Gustavo Rapretti offers elaborate recipes. Not to mention the fish from the open sea where Black Hake form the apex of a pyramid of fabulous fish.

The desert in Cuyo

Western and central Argentina is wine country. Mendoza and San Juan, along with La Rioja, form the heart. But it’s not only known for its wines. There are also apples, quince and pears, peaches and cherries, walnuts, almonds and pistachios. Quite a combo of flavours, season after season, they offer characteristics that cooks like Lucas Bustos and Pablo del Rio use in their restaurants.

Few things are more delicious than dulce de membrillo, a dried apricot or seedless raisins during the cold winter. Cuyo is a mecca for that. And so is a unique type of meat: goat. Especially goats bred in the nomadic way in the Cordillera, flame grilled, they ignite the carnivorous fantasy of any Cuyano. No one should leave without trying it.

From the province of Buenos Aires to Cordoba in the center, from La Pampa in the south to the edge of Tucuman and Santiago del Estero to the north, from Santa Fe and Entre Rios to the east, the Pampa Húmeda covers a wide area and is basically a huge reservoir of food.

With almost constant rain, wheat, corn and soybeans are produced in enormous quantity. But if wheat and soy are not what get you salivating, then the cows, their sausages and cheeses are three glorious examples of something that will. The Angus cuts, with improved genetics, whose ribeye steaks, ribs and tenderloins are bought by the likes of Francis Mallmann and Juan Gaffuri. As well as this the salamis of Tandil, Colonia Caroya and Mercedes, from French and Italian traditions, offer particular flavours due to their different fungi which depend heavily on the weather. There are also many varied cheeses, with a litter of new producers like Lincoln, Suipacha and Las Flores, in the province of Buenos Aires.

The unmistakable delicacy that is Dulce de leche deserves a special mention. You must try at least a tablespoon of the stuff, an alfajor crammed with it and of course dulce de leche ice cream, which owes its tastiness to the excellent milk.

And so, with this roadmap of flavours, all that’s left is to plan your trip! The table is set.