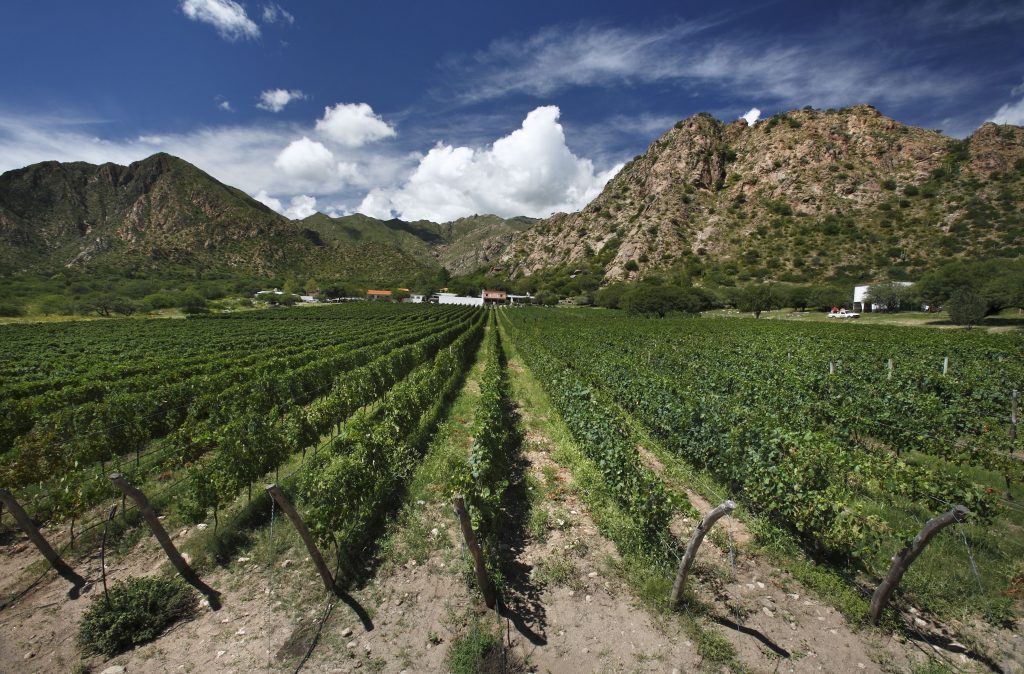 In the North of Argentina, almost on the border with Bolivia, there is a long chain of valleys where the vines grow under the blazing sun, on rugged slopes populated by cacti as high as an oak tree. Known as the Calchaquí Valley, the epicentre of wine is in Cafayate, the main city in the province of Salta.
At a height of around 1,700m, twenty or so wineries are producing unique red and white wines, where the rugged landscape is a key component. Visiting them involves winding dirt roads, crossing rivers with large potholes and tasting some of the most representative dishes of Argentine Creole food. In short, a three-day adventure, complete with wonderful hospitality and a hundred picture postcard views.

Starting point Salta
The colonial capital city of the province, is the starting point of the Calchaquí wine route. Getting here is easy by plane, and the first surprise is that it is set in a very green valley, a kind of subtropical forest. The vineyards are still 200km West, which is why it pays to do a night here.
The Cerro San Bernardo, which is reached by cable car, has the most complete view of the city. In the central square, look out for the Cathedral and the Museo de Arqueología de Alta Montaña. For its important pre-Columbian collection, the museum is a visit worth your time; where one of the most stunning exhibits is a collection of mummies discovered in the Llullaillaco volcano, at a depth of more than six thousand metres. At night, Balcarce street and its folkloric clubs, where you can listen to folklore guitar and watch traditional dance, go on until dawn.
However, it is in the food where the real journey begins. And good salteña empanadas are the perfect snack: filled with sliced meat, potatoes and red peppers, they are small and very juicy, so be careful not to stain your clothes! Also on offer are humitas, tamales, goat casseroles and goat cheeses that go extremely well with the powerful and tasty wines of the Calchaquies.

Onwards to Cafayate
The best way to travel is by car. The route is not difficult, but care should be taken. During the two hundred kilometre journey which links the city of Salta to Cafayate, Route 68 winds through hills and ravines, with greens giving way to the copper, red and russet shades of the mountain rocks. Before long, the landscape becomes less forest and more desert and is populated by huge cacti, called Cardones. On the verge of the Calchaquí Valley, in the Quebrada de las Conchas, erosion has carved the rocks into fanciful shapes: a toad, an obelisk, a friar and the most famous, Garganta del diablo or devils throat, all of which make for some great photos.
At the heart of the valley, Cafayate has sweeping views of vineyards dotted here and there which cover two thirds of the 2,933 hectares in Salta. One of the wines produced here is the celebrated Torrontés and the classic reds, Cabernet Sauvignon and Tannat.

Around the square of Cafayate life flows to the rhythm of slow bicycles, restaurants filled with parishioners and travellers and the craft markets. Take a walk around to buy some souvenirs and visit the Museum of the Vine and Wine, where they will explain how the terroir of the Calchaquí works and why its wines are different due to the particular temperature ranges, intense sun and alluvial soils.
Now the only thing left to do is visit some of the wineries. On foot, one can visit Vasija Secreta, the oldest of the bodegas. Then El Porvenir de Cafayate, which has a more modern style, and Bodega Nanni, a small winery which produces organic wines.
By car, on the way to Divisadero, Bodega Amalaya, is the most modern in the area, and higher still, Finca Las Nubes, from winemaker José Luis Mounier. Further South on route 40 towards Tolombón, are Finca Quara and Etchart, two very old wineries, both very important in the region. While on route 40 north, almost on the edge of town is Bodega El Esteco, with its stunning colonial buildings, it is surrounded by vineyards, and from the restaurant of its luxurious hotel, Patios de Cafayate, you can gaze out at the magnificent views.
In the area, three interesting wineries to visit are San Pedro de Yacochuya, owned by the Etchart family and French winemaker Michel Rolland. Piatelli, with very modern architecture, an excellent restaurant and panoramic viewpoint. And Domingo Molina, whose terrace offers a perfect sunset spot.

The highest vineyards
Leaving the town of Cafayate and heading north on the winding route 40, you arrive at Molinos after crossing the lunar landscape of the white and rocky Quebrada de las Flechas. Further up the road in Molinos are Bodega Colomé and Tacuil, two of the highest and most remote wineries in Argentina. The first is one of the oldest wineries in Argentina and home to the highest vineyards in the world, with breathtaking views in an untouched location, it also offers the Museo de la Luz, designed by American artist James Turrell.
Tacuil, on the other hand, is a charming rustic boutique winery.
From Molinos we return to Salta via Cachi, a whitewashed village, tucked into the hillside. Among the key moments of the drive back is the Quebrada del Obispo, which descends into the forested ravines below, and will be one of the highlights to remember. It should be seen before midday to take advantage of the cloudless skies and beautiful greenery.
A curious thing happens to travellers who have visited the Calchaquí. Those who have toured its ravines, met its people and walked along its rugged geography, have an extra sense when uncorking its wines. There is nothing better than uncorking a Malbec Salteño to remember the elegant power of its wine in the rustic charm of the valley.

The asado (bbq), an Argentine experience to savour with red wine

The white wine revolution is underway in Argentina