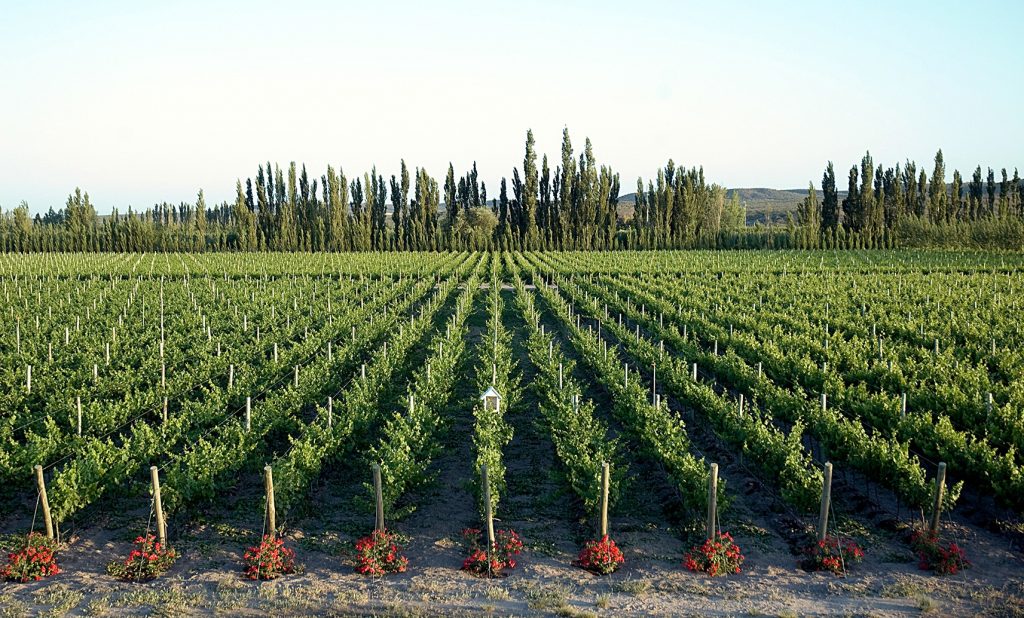 Having produced wine for over a century, the Province of Río Negro boasts terroirs containing decades old vineyards and unusual grape varieties that make it an ideal region to discover new dimensions to the Argentine wine scene.

Wines of Río Negro, a land of pioneers

Wine production began in Río Negro at the end of the 19th century with the development of irrigation channels that made use of the snowmelt from the mountains that swell the river from which the province gets its name.

Thanks to the creation of a complex system of irrigation channels that is still used today, a productive oasis was born in the middle of the Patagonian desert that concentrated mainly on the cultivation of fruit; primarily pears and apples, in addition to grapes.

One of those placed in charge of the works that transformed Alto Valle de Río Negro, the first wine region of Patagonia, was the engineer Humberto Canale who founded a winery in General Roca in 1909.

Since then, numerous producers have followed in Canale’s footsteps, importing French vines for their vineyards. Later, the railways would bring the first wines from Patagonia to Buenos Aires and the surface area of the region under vine would expand even further.

Today, wines in Río Negro are made with grapes from 1628 hectares of vineyard (0.75% of the national total) spread along 310 miles on the northern edge of the river.

60% of these vineyards are located in Alto Valle de Río Negro in places such as General Roca, Fernández Oro, Mainqué and Valle Azul.

“Alto Valle de Río Negro is located at a southern latitude of 38° and is equidistant between the Pacific and Atlantic Oceans,” explains Juan Vidiri, Head of Vineyards at Bodega Humberto Canale.

The location results in a dry, continental desert climate ranging from cool to temperate with ample shifts in temperature between day and night while the grapes are ripening.

The constant winds from the west help to control the humidity while the ample sunlight is another important aspect that differentiates it from other terroirs nearby rivers such as Bordeaux or Moselle (in addition to the difference in latitude).

Planted between the Río Negro and the Barda cliffs that mark the beginning of the Patagonian steppe to the north, the vineyards have “alluvial soils formed by glaciers that molded the Patagonian surface for millions of years,” says Hans Vinding Diers at Bodega Noemia.

As the glaciers receded, layers of different materials were left behind. Which is why today we find poor soils with good drainage full of stone, sand, clay and calcium carbonate.

All these unique characteristics result in an extraordinary natural healthiness that ensures consistent quality harvest after harvest with a good natural balance between the different grape components.

Because of the influence of the Río Negro on the formation of the soils and the microclimate of the Alto Valle, producers from the area refer to their output as “river wines”.

Here, Malbec accounts for 25% of total surface area of the vines and tends to have a mild character leading to balanced, subtle and elegant wines with good ageing potential.

In addition, varieties such as Merlot, Pinot Noir, Sauvignon Blanc and Semillón have produced excellent results over the past few decades in Patagonian wineries. Today, more unusual varieties such as Trousseau and Riesling are being rediscovered in old vineyards.

To determine which Río Negro wines offer the purest expressions of the terroir, we must take a tour of the different producers in the region.

For example, in the case of Bodega Humberto Canale their Gran Reserva line offers a very interesting classical Malbec and a Merlot remarkably similar to those seen in Bordeaux.

Another of their lines to remember is Humberto Canale Old Vineyards, a collection of varietals whose Semillón and Riesling stand out.

Marcelo Miras is a winemaker with extensive experience in the region and his family vineyard produces wines in which the character of the place comes out in every glass, as we find in his Malbec, Merlot and rather unusual Trousseau.

Bodega Noemia is an essential producer when it comes to understanding Malbecs from the Alto Valle de Río Negro, especially their Noemia Malbec made from a selection of wines planted in 1932 in Mainqué which are grown according to organic, biodynamic practices.

Bodega Aniello is another producer to bear in mind, mainly because of their collection of Pinot Noirs, which include a red, a rosé and an unusual dry white. The winery’s specialty is a Burgundy-style Trousseau.

There’s also Bodega Chacra, who have won international acclaim for their old vine Pinot Noirs, receiving some of the highest scores among Argentine producers from overseas critics.

Another producer with vineyards in Alto Valle de Río Negro is Hervé Joyaux Fabre, the owner of the Mendoza winery Fabre Montmayou in Vistalba. They produce the grapes for the winery’s Infinitus brand whose Merlot Reserva is an exquisite option for lovers of Bordeaux flavors. Meanwhile, Ojo de Vino, a winery from Agrelo with vineyards from Choele Choel, make their organic Malbec and Pinot Noir, Ojo Negro.

Finally, another interesting option among wines from Río Negro is a collection of Old Vines that Matías Riccitelli makes from vineyards he discovered on a research trip. There is no doubt that his two best Patagonian creations are a Bastardo varietal and his Merlot made with grapes from Allen.

One might also add the sparkling wines of the Familia Agresti, one of the leading sparkling producers in the area who specialize in the traditional method.

There is also a cluster of small producers of excellent wines such as Favretto Hermanos, Gerome Marteau, Cuvillier, Glanz, Aonikenk and Videla Dorna.

The list of wineries and producers ends with Bodega Wapisa, who are located in San Javier, close enough to the coast for the ocean to have an influence, almost in the Río Negro estuary.

There they make a medium-bodied Malbec and a citrussy Sauvignon Blanc with lively acidity, in addition to being the first winery to age their products on the sea bed.

Still want more? Why not read about the wines and gastronomy of Patagonia? Panna cotta with Patagonian cherries: a summer treat

Bodega Araujo, a Passion for Wine and Nature