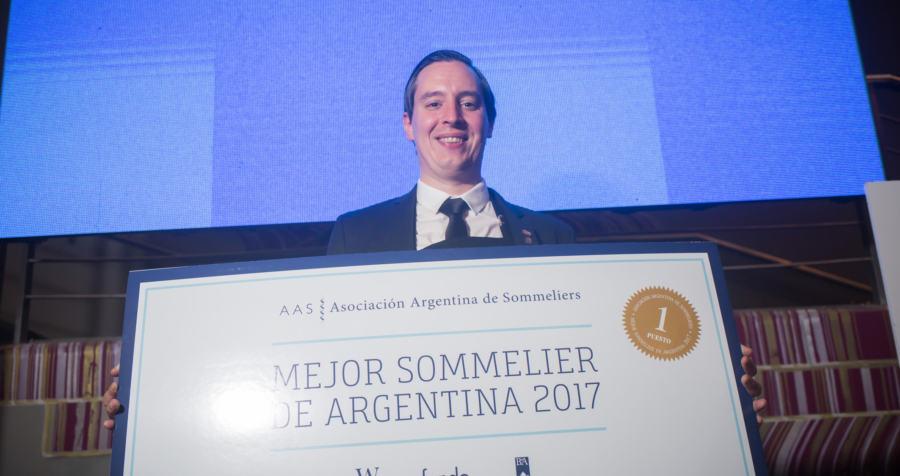 On October 31st, Martín Bruno, at just 34, became the best sommelier in Argentina at the 7th contest organized by the Argentine Association of Sommeliers (AAS). His is an exemplary career of what is today a profession in Argentina.

Bruno is one of the most prolific sommeliers in these latitudes. Current brand Ambassador of Pernod Ricard Argentina, his career began in the bars of Buenos Aires when he was a teenager. A bartender by trade, he learned the secrets of cocktails and spirits first hand, until in 2005 he decided to take a trip to New Zealand, where he would discover that his place was in the restaurant business.

Upon his return in 2007, he studied at the Argentine Wine and Spirits Centre (CAVE) while working with chef Hernán Gipponi and sommelier Andrés Rosberg, today president of the International Association of Sommeliers (ASI).

Later, in 2013, he worked a season at Michel Bras’s restaurant in Laguiole, France. It was six months of training, visiting producers and learning in the lounge of the prestigious establishment.

When he returned, he went to work for Florería Atlántico, a bar in Buenos Aires located at number 23 of The World’s 50 Best Bars, until his great moment arrived: renowned chef Germán Martitegui summoned him to assume the role of executive sommelier in Tegui, considered the best restaurant in Argentina by the San Pellegrino guide.

To achieve this, he had to overcome several difficulties. In the grand final of the contest, for example, among the tests was a blind tasting of three Malbec’s from different parts of the world, the service of a magnum bottle for a table of eight guests in which one of them also requested a cocktail, or being able to recognize mistakes in the details of the wines on a complex menu.

By unanimous vote, Martin Bruno was proclaimed the best sommelier of Argentina 2017. And thus became the first man to lift the title, with women winning the six previous editions. Second place was for Valeria Gamper and third for Stefanie Paiva.

Now, Martín Bruno and Valeria Gamper will be in charge of representing the country in the next Best Sommelier of the Americas contest, which the Pan-American Sommelier Alliance will hold in Canada in 2018, a contest that brings into play a vacancy for the next World Competition of the ASI, in Belgium in 2019.

As a profession being a sommelier is a very recent activity in Argentina. It was at the beginning of the year 2000 when the Argentine School of Sommeliers opened its doors, the first institution in charge of training professionals in the art of beverage service. However, the development of the activity may lead one to think that in Malbec country the skill of sommelier is a much older profession.

At present, Argentina has nine hundred trained sommeliers, while each year hundreds of candidates come from different provinces and different corners of the world. Thanks to the excellence of these institutions and the reputation of local sommeliers, Argentina is a benchmark in South America.

Many of these professionals find work in restaurants, wineries, wine bars and even in the media, both in the country and in other parts of the world. Paz Levinson is a good example. Winner of the national title in 2010 and 2014, current best sommelier in America and fourth worldwide, she runs one of the most reputed restaurants in Paris.

Meanwhile, in 2016 the Argentine Association of Sommeliers was at the top of the international scene when it organised the last ASI Global Contest in Mendoza.

Now, Martín Bruno is in charge of representing Argentina, and just as he got his experience at a time when the profession was becoming ever more popular, his life is a parable of local producers: with effort, dedication and perseverance, they are moving further forward into the art of making and serving wine.