Vivino is launching the results of the 2018 Vivino Wine Style Awards, recognizing the very best and most beloved wines from around the globe. This year’s award winning wines were determined by its users and the millions of wine ratings they’ve submitted over the past 12 months. It includes the top ten best-rated wines across 149 categories and, in order to qualify, wines had to have a minimum of 50 ratings given during this period.

Vivino is the world’s largest online wine marketplace, powered by a community of 26 million wine drinkers who use the Vivino app to scan and rate more than 500,000 wines every single day. Through Vivino.com and the Vivino app, users discover and buy wine based on their individual scanning, rating and purchase behavior and community recommendations, making wine discovery fun, accessible, and easy to understand for wine drinkers of every level of expertise.

With this app, users take a photo of any wine label or restaurant wine list with their mobile device and Vivino’s proprietary image recognition technology delivers ratings, reviews and average pricing for every bottle instantly. Founded by Heini Zachariassen and Theis Søndergaard in 2010, Vivino is available for download on Android and Apple devices.

ARGENTINA WINES AT THE TOP


Several Argentine Wines received outstanding results in the list of Best Rated Wines. The Volturno 2010 of Viña Cobos obtained the highest score from across all global categories, after also having qualified as the best of the Argentinian Cabernet Sauvignon – Malbec category making it the number 1 rated wine on Vivino. In turn, the Malbec 2013 from the same winery, also qualified top in the Best Rated Wines qualifying before as the best in the Argentinian Malbec category.

Other great results went to the Estiba Reservada 2004 of Catena Zapata, which featured in the top 10 of the Best Rated Wines and the Best Reds list –having previously qualified top in the Argentinian Bordeaux Blend category– and the Lindaflor La Violeta Malbec 2009 of Bodega Monteviejo which received second place in the Argentinian Malbec and a prominent place in Best Reds too.

It should be noted that Catena Zapata was the only only producer that won in every single style of Argentina and racked up the most winners with 15 total winning wines. They obtained more winning wines than any other winery in the world!

At the same time, great news for Argentina comes with the results for Bonarda, the second most cultivated red variety in Argentina (with 47.128,08 acres). According to Vivino, the category Argentinian Bonarda has grown in average cost by 82% compared to 2016, which shows a consumption trend that seeks more premium wines of this varietal.

Congratulations Argentina! We make a toast to our industry and its achievements! 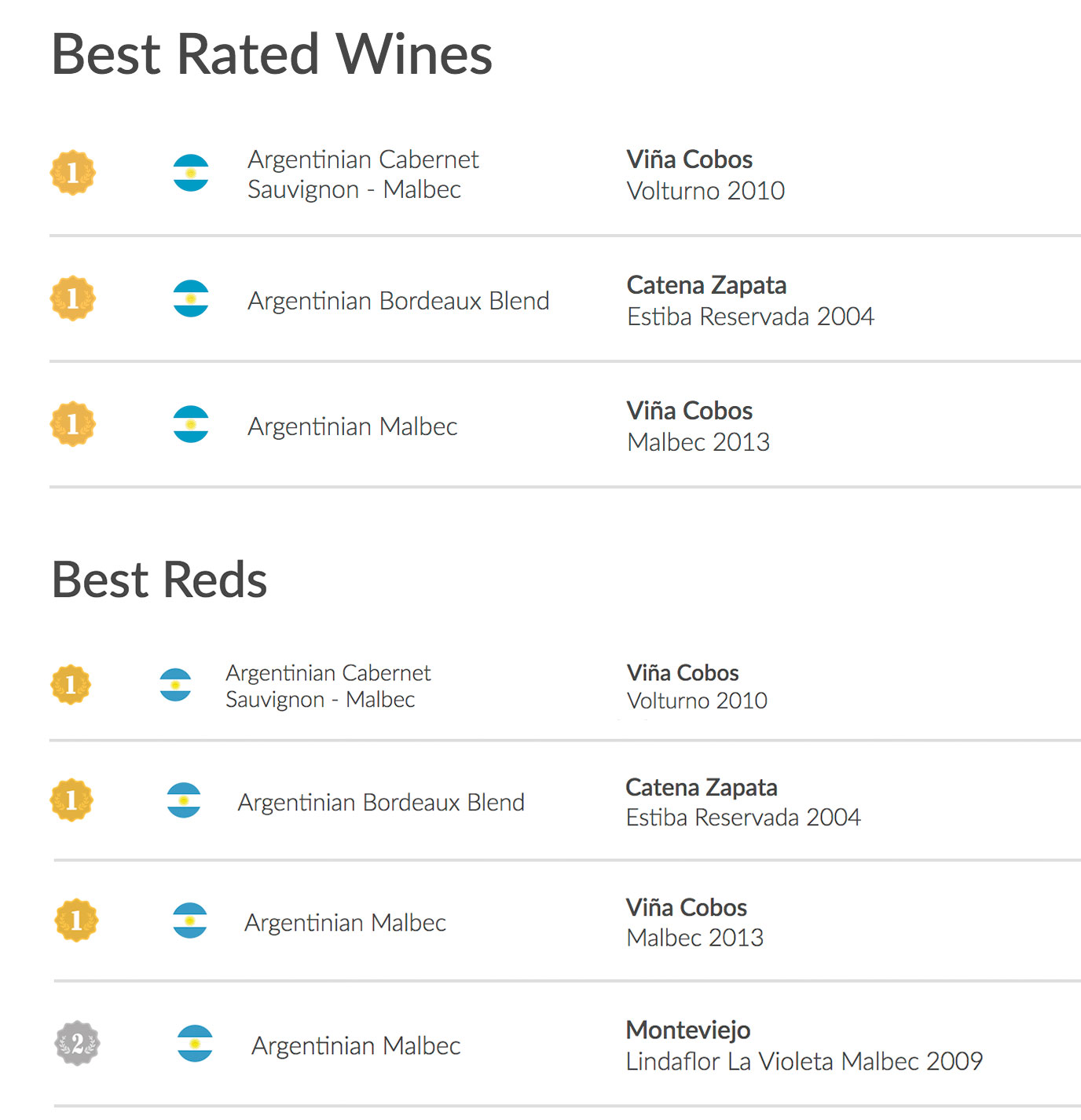 Who is the best sommelier of Argentina 2017?

Why do Argentinians love invading your personal space?