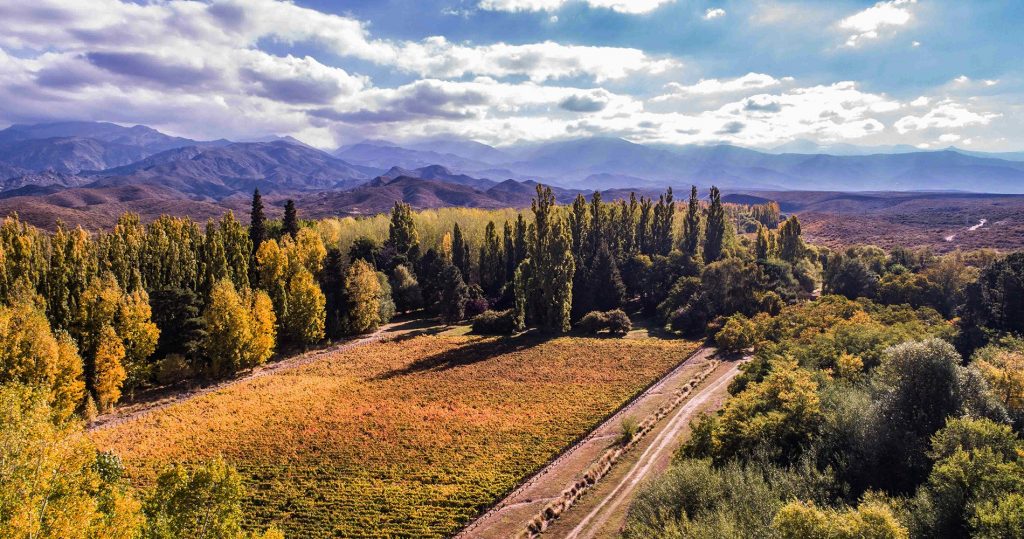 The wine growing regions of Argentina are being charted with ever greater precision. Whereas just over a decade ago, geographic designations essentially followed political borders, lumping vast tracts of very different land in together, today producers are identifying the exact areas where meaningful distinctions can be made between local terroirs. This is certainly true of one of the newest Geographic Indications: San Pablo, which was approved in 2019.

Located in the northwest corner of the department of Tunuyán, the San Pablo GI essentially follows the path of Ruta 89 up into the mountains, at a height of between 1175 and 1700 metres above sea level.

To date, it contains 500 hectares of vines, mainly planted between the Villegas creek and Las Tunas river on hills and alluvial terraces that provide good soil variation with different sections proving rich in lime, clay and calcareous rocks.

However, the stand-out quality of San Pablo is its proximity to the Portillo Ridge which preliminary studies say make it one of the coolest areas of the valley, thus justifying its status as a separate GI.

Rainfall here also differs from the rest of Mendoza: above a height of 1400 metres, it receives an average of 500mm a year – the average for the province is 200mm – while the lowest part of the GI receives 250mm. Atmospheric humidity is similarly high.

The abundance of water is reflected in a rich native flora among which the aromatic herbs jarilla and thyme thrive. If you combine the relatively high rainfall with the altitude, which ensures a cool climate – the entire GI is in Winkler Zones III, II, and I, mild to cold – then the higher ground begins to look like excellent terrain in which to grow Chardonnay and Pinot Noir.

‘In my opinion, it’s one of the best places in the valley to make whites, because it combines a cool climate with soils that have a fine top layer over the stone,’ says Sebastián Zuccardi, for whom San Pablo provides grapes for Fósil, the winery’s iconic white. He means that the soils, which are cool as well, act as a buffer leading to slower ripening. ‘For instance, when we’re harvesting Chardonnay in San Pablo, in Gualtallary they’re already harvesting the Malbec.’

Fabián Valenzuela, the oenologist at Bodega Tapiz, has been working in the area for 20 years, overseeing the winery’s Alta Collection Chardonnay: ‘The whites ripen so gradually that we can harvest them in stages and get a different profile each time, with mild alcohol and precise acidity. It’s hard to do that elsewhere in Mendoza.’

Salentein, another pioneer in the region, makes remarkably precise wines using small parcels of vines: ‘especially grapes from the section where the vines climb the mountain over the cone of the Villegas creek, where the dampness and soils combine perfectly for Burgundy varieties,’ says José Galante, the experienced oenologist who runs Bodega Salentein.

In this part of the San Pablo GI, about 1600 metres above sea level, the winery owns vineyards of Chardonnay, Pinot Noir and Malbec, which are set among forests of walnuts, chestnuts and cypresses. Salentein use grapes from here to make their Salentein Single Vineyard Los Nogales, Los Jabalíes and Las Secuoyas, all of which are turning heads with their sharp, tense style.

This is also the spot where San Pablo’s long history begins: during colonial times, the ‘high’ farm was dubbed San Pablo by Jesuit missionaries before they were expelled from the Americas in 1767.

The history of the San Pablo GI

San Pablo GI designation was requested by three wineries with bases in the region: Bodega Tapiz, Salentein and Familia Zuccardi, but it encompasses 11 winegrowing properties, notably the Díaz Valentín, Familia Pellegrina and Diego Rosso  establishments – the latter makes a Malbec under that name – alongside vineyards belonging to larger producers such as Norton who use grapes from the GI to make Norton Altura White Blend and are also planting Grüner Veltliner.

There are also a handful of vineyards higher up in a place called Un Lugar en Los Andes, which are owned by Walter Scibilia, who produces about a thousand bottles of Pinot Noir. Although vines have been grown for quite a while, in colonial times the region was used for other purposes.

The Jesuits mainly reared livestock in pastures and this activity would continue in subsequent decades, along with cottonwood lumber and fruit cultivation before vines finally made an appearance. Because the local streams provide excellent quality water, down-slope irrigation was common.

Currently, due to the general slope of the region, San Pablo has a pressurized irrigation system in which gravity is used to distribute water across 1860 hectares of different crops (there is potential to expand the system to 4676 hectares). A one of its kind in Argentina at the moment, a pilot scheme is currently underway to see if it might be replicated in other areas.

So, this isn’t a GI that is going to be expanding its vineyards any time soon and this ensures that quality is maintained, guaranteeing the prestige and value of wines from the area.

If you found this interesting, why not read a little more about Argentine wine?  https://blog.winesofargentina.com/non-alcoholic-wines/

From the Rhône to the Andes