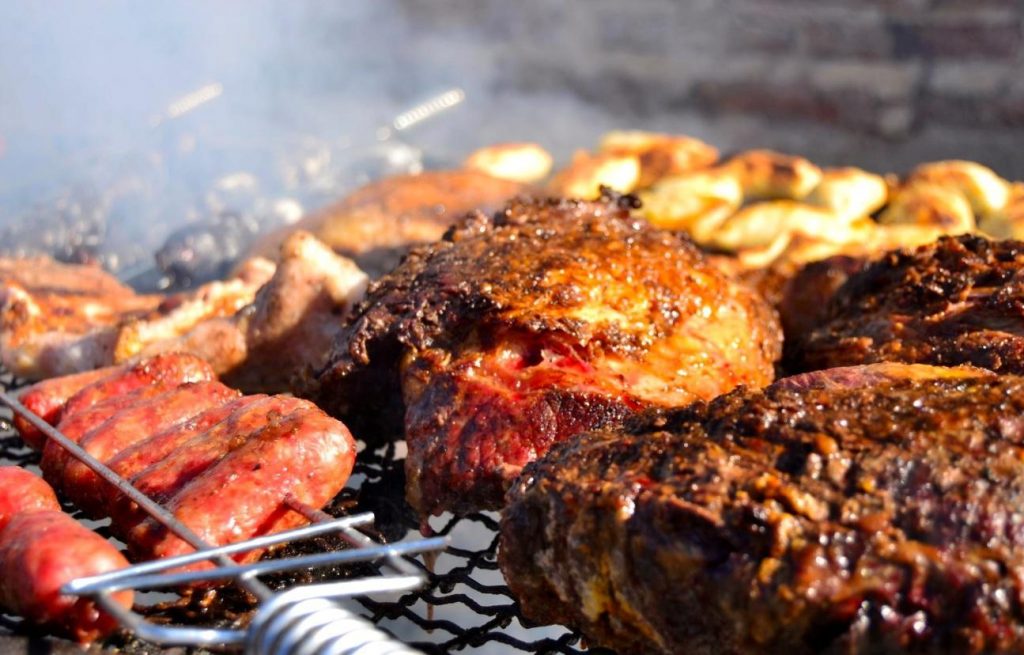 The open fire, the smell of meat on a hot grill with friends and family gathered around it. Both North and South America have long, proud but quite distinct barbecue traditions.

“In the USA there are two major types of barbecue. The smokers of the south (Texas, Memphis, Kansas and North Carolina, among others), where the meat is cooked slowly with a separate heat source, and the steak houses and urban barbecues found in people’s homes where the meat is cooked over a flame. The first style is similar to the Argentine cross-stake technique, the second is like our parrillas although we wait until the embers are red hot before putting the meat on the grill,” says Juan Gaffuri, the executive chef at Four Seasons Buenos Aires.

Gaffuri isn’t just one of the world’s leading experts on the meats of Argentina, he also spent three years in the USA where he oversaw the opening of a Bourbon Steak (the gastronomic brand of the chef Michael Mina) restaurant at the Four Seasons in Washington.

To simplify a little, at southern-US style barbecues, smoke and heated air are used to slow cook large cuts of meat such as whole pigs and sides of beef. Home barbecues, on the other hand, cook far more quickly. “The grills are small, designed for hamburgers, sausages and steaks,” says Allie Lazar, a gastronomic journalist originally from Chicago who has lived in Buenos Aires since 2016. One cooks over a direct flame made with charcoal briquettes. “The briquettes are lit with some kind of lighter fluid and the whole process, from lighting the fire to serving cooked food, doesn’t take much longer than a half hour.”

In contrast, the rules for a proper Argentine asado are strict and quite different. One uses wood or charcoal lit with nothing more than matches, paper and kindling. “A skilled Argentine barbecuer must also know how to choose the right cuts of meat and make a quality fire. When you spread the embers to roast the meat, they should be red hot, with no black parts left in the case of charcoal and no live flame in the case of wood,” says the Institute for the Promotion of Argentine Beef.

Spreading the embers in different concentrations makes it possible to achieve different temperatures to suit each cut of meat. A whole rib will require fewer embers and should be cooked for an hour or more, a smaller cut such as sirloin requires more embers for a shorter amount of time.

And there are other differences. In the US, rubs, blends of spices (both wet and dry), are used to flavour the meat. In Argentina only coarse salt or brine are used. Then there are the cuts: the US offers brisket and pork shoulder while Argentina boasts tira de asado (similar to short ribs) chorizos and achura (offal). Even the side dishes vary: in Argentina it’s common to add peppers, potatoes, sweet potatoes and whole onions to the grill and to serve the meat with a salad of lettuce, tomato and onion. In the US corn caramelized on the grill, coleslaw and the classic potato salad are more frequently seen.

“Another difference is the ritual. In the southern states of the USA, it occurs in restaurants where everyone eats at long wooden tables covered in brown paper,” says Jull Craig, founder of Smoke King, the leading brand of American style smokers in Argentina. In contrast, Argentine asados are usually organized by groups of friends and family and begin when the fire is lit with a glass of wine and snacks.”

“For steak, I like the heat I get from American barbecues, which caramelize the surface of the meat in minutes. For cuts with greater texture that suit slow cooking, I prefer embers. At Nuestro Secreto (the luxury parrilla at the Four Seasons Buenos Aires) we took some ideas from the USA like soaking the meat in brine for 24 hours with a little sugar to make it juicier and get the perfect sear.”

Whether it’s barbecue or asado, each country cherishes their barbecuing technique. However, one thing is clear: when it comes to cooking over an open flame, both the USA and Argentina share a deep passion inspired by the warmth of the fire.

Did you enjoy this article? Keep reading, THE ASADO (BBQ), AN ARGENTINE EXPERIENCE TO SAVOUR WITH RED WINE

The Sommelier’s Perspective: The Most Original Wines of Argentina