Posted inMeet the Wineries WofA
Posted by By Wines of Argentina 23 August, 2021 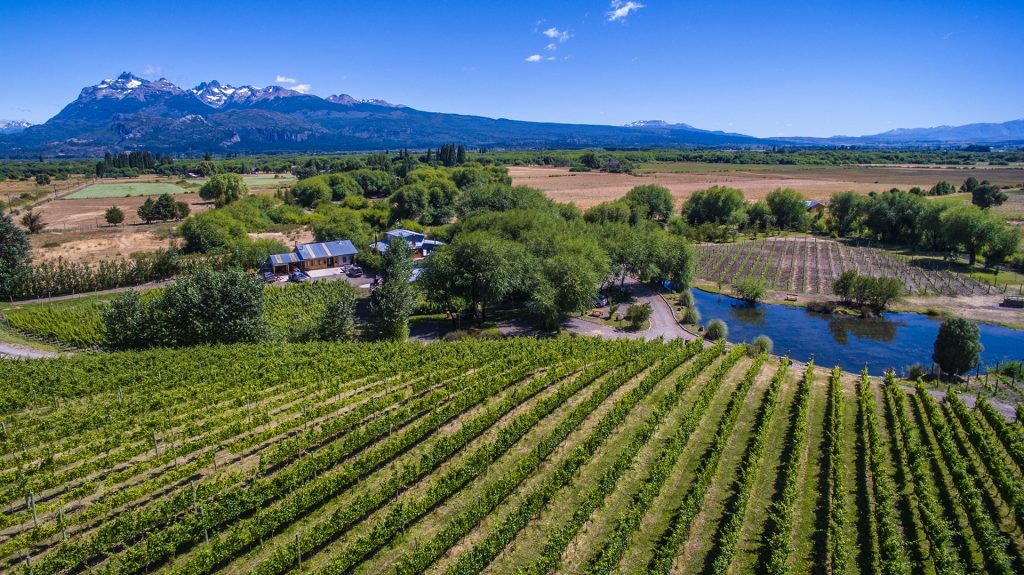 Most visitors to the Trevelin Valley in Chubut know Nant y Fall as a lovely waterfall on the outskirts of a town populated with old windmills and tulips whose river joins the Futalaufú nearby. But for wine lovers, Nant y Fall is the name of the first ever vineyard in the region.

It all began in 2010. The chef Sergio Rodríguez, originally from Mar del Plata, had lived in the area for several years running a service area for camper vans.

The facilities were top notch, providing everything the giants of the road might need on their journey from as far afield as Alaska or just setting out from Ushuaia on their way north up the continent.

The hilly land nearby the Nant y Fall waterfall seemed perfect for a crazy project, thought Sergio, as he considered continuing a family tradition of planting vines as a means of adding value to his roadside station for motor homes.

With more enthusiasm than knowhow he began to plant his first rows of Pinot Noir, which turned out to require rather more care than he’d expected.

He had to protect them from frosts, prune them, tie and tidy them up, turning himself into a professional gardener to keep them safe from the sun and the wind.

“People came by to see what we were doing,” says Sergio with the mixture of amazement and naivety that has driven the vineyard project from the beginning.

“By the first harvest, back in 2016, the Nant y Fall vines had already attracted the attention of other producers in the area,” he says and they began to compare notes and offer mutual advice.

In fact, Casa Yagüe and Contra Corriente, the other two wineries in the area, took heart from his lead.

The wines of Trevelin

So, by 2016 the vines by the side of the Nant y Fall stream from which the vineyard takes its name were mature, and the area’s first ever garage winery was ready to go.

From thence came the first wines, which encouraged the notion that if grapes prospered in the area and produced wines with a distinctive character, then perhaps a new wine region had been born.

By the 2021 harvest, Viñas Nant y Fall was a fully formed winery running by the side of the camper van establishment.

“And in the middle of all this, the pandemic struck,” Sergio laughs sitting by a stove in what appears to be his control room.

He and Emmanuel, who oversees the winemaking process and the 2.5 hectares of vines, produce ten thousand bottles and they’re hoping to expand in the short term.

Alongside the original Pinot they’ve added Chardonnay, Gewürztraminer, Riesling and a few rows of Torrontés.

“The nursery made a mistake, we ordered Pinot Gris,” says Emanuel who tends to the vines just the same. “I don’t think they’ll they grow, but who knows…” he says with a hint of hope in his voice.

Today, Viñas de Nant y Fall sells its wines from the inn on the camp site and to a few local restaurants. They’re also to be found in the cellars of some of the iconic restaurants and hotels of Argentina such as Hotel Llao Llao and Parrilla Don Julio.

It’s going well: they’ve sold out the entire stock they’d set aside for tourists passing through, a hunch that really paid off.

“Now we love the vines, and we know how much value they add for us as a tourist destination. In fact, this summer was warm and the site was crowded with people looking to get outside. The tables were full of our Pinot Noir,” he says proudly.

In the cute little winery by the vineyard, they bottle a Pinot Noir rosé and an easygoing, oak-aged red. They’re also experimenting with steely whites and sparkling wines but thus far have only produced a few bottles of Chardonnay and Gewürztraminer for consumption on site.

With their electric, svelte style, the wines of Viñas de Nant y Fall are earning quite the reputation for themselves, one spread by word of mouth along roads and highways from Ushuaia to Alaska.

It no longer seems so unlikely that in the near future people might be visiting the waterfall made famous by the local winery.