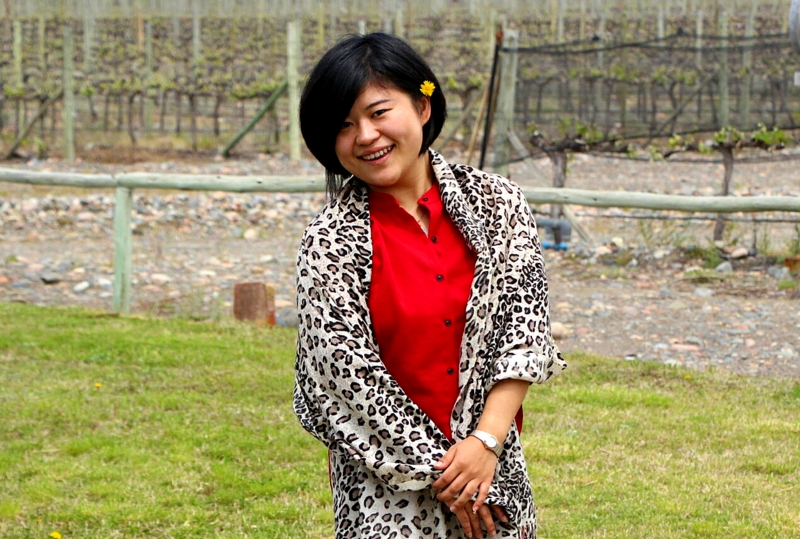 Esmeralda Zhang visited Argentina between 22 – 31 October with the WOFA ASIA program: IMPORTERS TRIP together with importers from 5 other companies. Esmeralda is 27 and is Product Manager for one of the most important importers of textiles and wines in the country: CHINA SDIC INTERNATIONAL TRADE CO, LTD.

In this interview she talks about her vision for Argentina and our wines in the future.

1. How did you begin importing wines to China?

The company began importing wines in 2005, on the initiative of our Director, who is a great lover of wine
At that time, the company imported wool and other textiles from South Africa and on one of his trips where he had the opportunity to taste the wines and learn about the regions, he decided to expand the business and become importers of wine.

Back then we did not have a distribution network created for the product so we had to develop one from scratch in Beijing. Today our main sales channels are private collectors and corporate clients and we have distribution networks in Beijing, Shanghai, Dalian, Qingdao, Nanjing, Xiaan, Zhejiang, Tianjin., Among others.

2. His company is very versatile. What is the role and size of business?

The company trades in commodities, with more than 100 countries worldwide. Its registered capital is 1.5 billion yuan; and it has assets totalling 10 million yuan. Its turnover last year reached 30 billion yuan, and import and export volume amounted to more than 2 billion dollars. The volume of imports of various commodities are ranked among the best in the country, such as cotton yarn and cotton, wool, minerals, high-end oils and oilseeds.

The company has been in the wine business since 2005 and has traded mainly in South African and Chilean wines, so it has developed an exclusive relationship with several wineries over the past 10 years.

3. What is happening in the Chinese market in respect to wine and how do you see Argentina in it?

In my humble opinion, China has not yet developed a mature market compared to other countries. However, this started to change about three years ago. The new Chinese president started an anti-corruption campaign and this cut government consumption which had been very high, especially with high end wines from France, (note: the so-called third consumption that we talked about in a previous post) so he forced a restructuring of the entire market.

Following this, there was also another phenomenon: that a lot of cheap wines from Chile or Australia began to appear on the shelves.

Regarding Argentina, on the other hand, we perceive it as more serious, with a higher perception of quality. We believe that Argentina is an icon of quality. It is an essential element of the global wine map. And I am convinced that in the next five years Argentine wine will play an even greater role.

Chinese consumers are developing a culture of wine and they will begin to appreciate wines of high quality.

4. How is Argentine wine perceived in China?

After my short but intense experience with Argentine wine on this trip, I perceive that you have multiple styles. This was a big surprise for me because in China we believe that Argentine wines have a singular style: strong reds, lots of oak, deep colours and not very friendly to the untrained palate of consumers.
But thanks to this tour I have discovered that this idea was completely wrong and there is a world of styles and subtleties that left me very surprised. There is something for everyone!

5. Do you think that a fruity, lighter more elegant style of wines, with less oak, is better suited to the Chinese palate?

Yes, for sure. The first stage is to introduce a consumer friendly wine, and then, when they have more culture and knowledge, they will better appreciate wines with more complexity and structure.

6. And what is your opinion of Malbec?

I thought that Malbec had only one style: full-bodied, strong and concentrated. But, I repeat, I now feel that Malbec has multiple styles. From the more elegant and light in Patagonia or Valle de Uco (to name a few regions) to others more full bodied, aged, intense and voluptuous.

I have to admit that beyond the styles, the amount of fruit really caught my attention and I think that this quality will be very popular in China. It has the power to open up the Chinese market for Argentine wines.

7. What can we do from Argentina to attract Chinese consumers in terms of image and strategy?

With Chile, the volume is growing thanks to the free trade agreement we have with them. It is a favourable element to keep prices low. But Argentina doesn’t have that advantage and therefore Argentine wine is more expensive and less competitive compared with other countries.

But I think Argentine wine is better, more attractive, for example, the delegation was very intrigued to know the country, its terroir and the wine produced here.

More events and promotional activities need to be done in major cities: Beijing, Shanghai and Guangzhou to make consumers aware of this country. Because there is still much ignorance about their culture and products. The only thing they know about Argentina is Messi and Maradona.

Ah … yes, yes! There are private groups in Beijing which teach this beautiful dance.

I think Argentina has great potential to succeed in this market because as a country with a strong culture of European descent which has such strong cultural icons, it has a different way to communicate their products. I think public recognition will be more easily achieved in time.

After years of strong growth, the consumption of wine in China declined at the beginning of 2013. Years of stock generation and the effects of anti-corruption policies carried out by the new government since 2012, have greatly affected both local and imported wines.

The consultancy IWSR (International Wine and Spirits Research) measured the retail market value of still wines at about 78 trillion RMB, of which about 32 billion belongs to the segment of imported wines. The retail price for an average bottle of wine has been decreasing since 2009 and in 2014 it was around 86.00 RMB for imported wines.
Even though these numbers are promising, the stocks across all channels remain high, with importers such as C&D, Jointek or Aussino still trying to get rid of unsold inventories before placing new orders.

While wine consumption continues to be closely linked to the on-trade: food is the main consumption occasion and so declining business banquets was a blow to the segment.

In February 2014, the market numbers reflected a growth of 11.8% YTY. However, the richest portion of social classes spent 15% less on luxury goods and 25% less in gifts versus previous years according to the Hurun report. The vast majority of large Chinese wholesalers sold only local wines without marketing or branding strategies, where sales are purely based on price.

As for distribution networks, Lianhua, belonging to Shanghai Bailian Group, is the largest retail chain with over 5,000 outlets throughout China, including department stores, hypermarkets, supermarkets and convenience stores. Another of the great players of Chinese capital is CR Vanguard (Chinese Resources Vanguard), which has more than 4425 outlets and in 2013 announced a joint venture with the British supermarket, Tesco, which will result in the integration of more than 131 supermarkets.

A number of shops specialising in wines have also emerged, on the high street and online, like Aussino (98 stores), Torres Everwines (32 stores) and Oh Marco (23 stores). Independent retailers include, Jenny Lou’s, Jenny Wang’s, April Gourmet and BHG, all from Beijing.

Online channels, meanwhile, are growing rapidly but their importance has been exaggerated according to some analysts. Chief among them is Yesmywine.com with sales exceeding 100,000 boxes, wine9.com and jiuxian.com

While China remains fertile ground to develop distribution channels and much remains to be done, we must not forget that of the top five importers of wine, three of them are little known logistics companies.

But having said that, the foundations for wine consumption in China remain strong for the long term. First because there is a great local wine industry, most of which is controlled by the state, and is well positioned to support growth.
Second, per capita consumption remains well below other producing countries and increasing population penetration will help the market grow. Moreover, there is a growing middle class (in China the equivalent of a medium-sized country moves out of poverty each year), and these new consumers will fuel growth.
Finally, wine is much healthier than the staple grapa or baijiu, (made from grains with a high alcohol content) and provides a type of sophistication that some Chinese consumers are desperate to achieve.