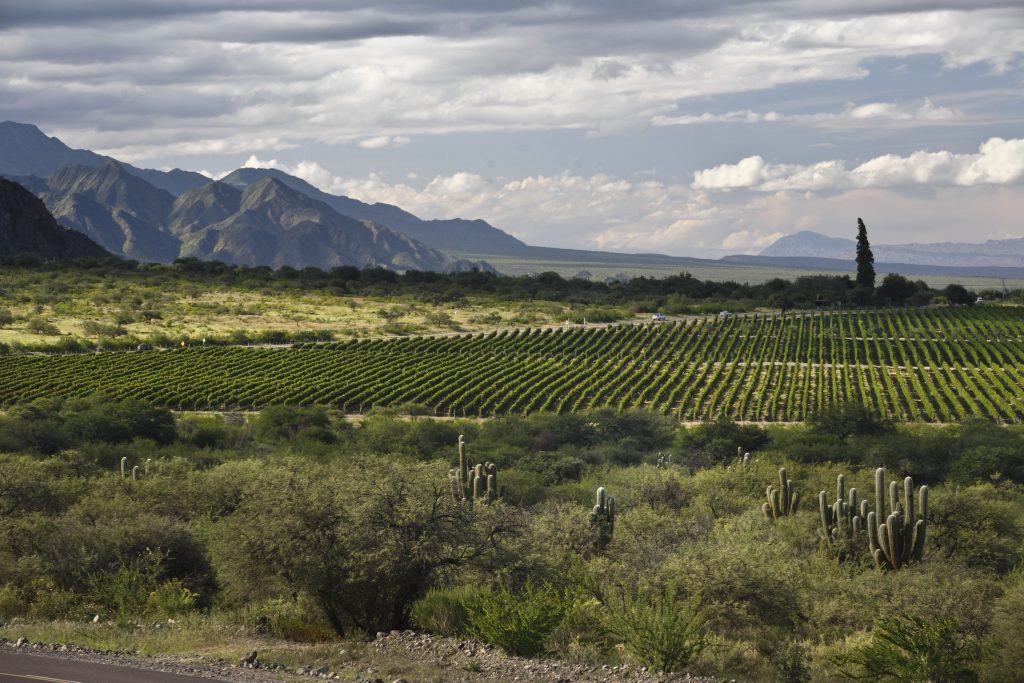 Argentina is a long country. From south to north it stretches about 3,800km, and there are vineyards in at least two thirds of that extension, with two, well marked, extremes. On one, the sunny vineyards of the quebrada de Humahuaca, which kiss the Tropic of Capricorn. On the other, the sparkling wine plantations in the far southern latitudes, such as the 46th parallel South, Los Antiguos, Santa Cruz province, the heart of the Patagonian steppe.

Of course these two extremes are experimental. To the North in Huacalera, extends a small vineyard of Malbec and Cabernet Sauvignon, while those in the south are trials with Chardonnay and Pinot Noir, barely larger than one hectare.

But beyond the scale, what is important, is that the distance between these two extremes is similar to the distance from the island of Crete in the Mediterranean, to the Champagne region, northeast of Paris. This is unique to Argentina. A condition which also offers a wide range of possible wines. From Salta and Jujuy in the north to Neuquén, Chubut and Rio Negro.

What distinguishes each region and how can we notice it in the wine?

To the north, in las quebradas (the ravines)

In the northern provinces of Jujuy, Salta and Catamarca, the viticulture develops in Andean valleys, in the form of small oases, reaching some 3,600 hectares. There, the key factor is height. Without it, it would be impossible to achieve such expressive wines, since the primary regulator of these arid and rugged terroirs is that the vine grows from around 1500m up to about 3100 m.a.s.l, in extreme cases, such as the vineyard El Alto, of Bodega Colomé, Salta.

The height is not a whim. Theoretically, with every 150 meters of linear ascent, the average temperature drops by one degree centigrade. And this regulatory effect allows the cultivation of grapes at such low latitudes such as the Tropics, with healthy and balanced vineyards. But just as you regulate temperature, height also imposes a harsh and unforgiving sun, unfiltered by the many layers of air that exist, in Patagonia, for example. Therefore, in this region the sun is the other key factor.

Alejandro Pepa is the winemaker at Bodega El Esteco, one of the leading wineries in the Northwest. With its headquarters in Cafayate, the epicentre of wine production in the region, it makes all the stylistic varieties and range possible. He argues that “in the reds, the main differential of the Northwest is in the color concentration and intensity of flavours: they are powerful wines, but we have to work hard on the farm to express the terroir, otherwise we would only have concentrated wines. Here, the dry climate, the height and intensity of the sun make the grapes naturally develop phenolic structure, “he explains. And so, what in other regions of the world is hard to accomplish, here, it’s what we have: well-crafted wines with structure and balance.

Just look at a glass of Malbec or Cabernet in the region to have a clear idea “deep and opaque colours are dominant, with intense aromas, fruits and especially spices” explains the winemaker at Bodega El Esteco.

However, in terms of Torrontés, the criolla grape and emblem of the northern quebradas, this exaggerated climate moulds highly perfumed and floral whites, with fine body. Recently voted as the young winemaker of the year by Gaucho Annual Winemaker Awards, Mariano Quiroga Adamo says “due to the extreme climate, Torrontés matures in time with its terpene compounds, so if it does not work well in the vineyard and in the winery, it can give off a bitterness that not everyone likes. “In recent years, without going any further, most of the good Torrontés of the Northwest has offered an elegant profile, as well as aromatic, reflecting an increasingly careful preparation.

Around the 38th parallel south latitude and following the Neuquén River and then the Rio Negro, lies the bulk of the vineyards of Patagonia: 3360 hectares. At an average height of 250 m.a.s.l, it is a large oasis, which crosses the region from West to East along the watercourse. Further south however, there are a handful of minor oases, though now they barely exceed 20 hectares.

In this region, the key is not so much the intensity of the sun, but the number of hours for which it shines. That, coupled with the constant wind and the wide temperature range of the desert, produces intense and concentrated wines, but in a very different way to the Northwest. For Marcelo Miras, winemaker at Bodega del Fin del Mundo, with more than two decades making wine in the region, the key is “in the wind, combined with the sun, which makes grapes thicken their skin, so the wines are naturally rich in phenolic substances, although they retain high natural acidity, “he explains.

That is the main difference with the rest of Argentina: acidity. While most other regions provide structured wines, with poor natural acidity.

Something that, in Patagonia is achieved with little effort. Hence, the reds are bright to look at, with good fruit in the nose, with whites armed with a voltage higher than average. Looking for that tension, in recent years, the Patagonian frontier has moved further south.

Thus in Paso del Sapo in Sarmiento, two minutes from the heart of Chubut, there are experimental vineyards producing sparkling wines. The same is happening in Los Antiguos, at the southern limit of vineyards in Argentina, where 1.5 hectares of vines are used to test the conditions around the Lago Buenos Aires.

However, in Patagonia the limit of the terroir imposes the early cold in the fall and the late frosts in spring. So the varieties that are best suited for medium and short cycle: in reds, “Malbec comes right along with Cabernet Franc – not Cabernet Sauvignon which only matures some years – and Merlot“ says Miras. In whites, Chardonnay offers a delicate and tight profile while the Sauvignon Blancs are thin with traces of citrus and vegetables.